FINDING YOUR VOICE TO BE RELEASED IN EBOOK FORMAT!

I know some of you have purchased copies of my first writer's how-to, FINDING YOUR VOICE, and in recent months I've heard from others who've tried to buy it from Writer's Digest Books (the publisher) via Amazon, and were told it was sold out. Well, we've done something about that! My agent, Chip MacGregor obtained the ebook rights for it and we're bringing it out in ebook format and at a greatly reduced price. Right now, it looks as if it'll be available for $4.99. which is half of what WD ebooks usually sell for.

I've changed the cover (below) and my very talented nephew, Bo Goff, designed it for me. Bo is my wife Mary's nephew which make him mine as well, right? Right! Anyway, Bo is a hugely-talented artist who won all the art awards he could carry when he graduated from St. Francis University. If anyone is looking for a cover designer, you might want to talk to him. Just email me and I'll put you in touch with him, okay? 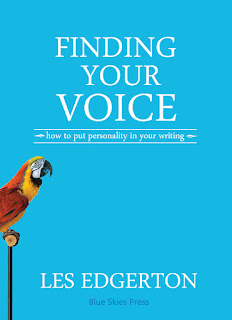 It's in the process of being formatted and should be available on Amazon in less than a week. Hope you glom onto a copy when it goes up for sale. I'll announce it here and provide the link when it does. If those who've already got copies and found it valuable, I'd appreciate a short review when it appears and also if you guys could hit the "Like" button.

I'm very proud of this book. Over the years it's been out in hard- and soft-cover, I've received lots and lots of letters and emails from writers who found it helpful in their own writing.

Oh--on a week from this Friday, Kristen Lamb is having me on as a guest blogger on her very popular blog, Warrior Writers, where I'll post a chapter from FINDING YOUR VOICE  for those who like to sample the wares before plunking down their hard-earned cash. Check it out on April 20 at Kristen's place at http://warriorwriters.wordpress.com/

One last thing... If you haven't yet voted in the Spinetingler Magazine's awards, voting is open until the end of the month. I could use every single vote you can send my way for my thriller THE BITCH in the Legends Category. Just go here and vote away: http://www.spinetinglermag.com/2012/03/31/2012-spinetingler-award-voting/ I can't begin to tell you how much it would mean to me to win this puppy!

Or, if you want to purchase a copy, go here:

As always, thanks so much for everyone's support. I'm pulling for you as well--after all, we're all in this together aren't we!

Blue skies,
Les
Posted by Les Edgerton at 9:18 AM