More blurbs for THE RAPIST and more snazzy writer's quotes

Got a couple more blurbs for THE RAPIST to share with you and get this buzz thingy going. And, following these are more writer’s quotes.

When Les Edgerton asked me to read an ARC of “The Rapist” he warned me with that title it may not be my thing and he was okay with whatever I decided. I knew of his writing books like Hooked: Write Fiction That Grabs Readers at Page One & Never Lets Them Go and Finding Your Voice: How to Put Personality in Your Writing  but never had looked at any of his fiction. I was prepared for something graphic but he refused to talk about the plot or storyline. No hints.

I was ready to be offended. I’m a strong advocate for women’s equality and won’t tolerate or put my name near anything that belittles woman. With a title of “The Rapist” it had two and a half strikes before I read the first line because rape is all about a man having power over a woman.

From the first pages the words and voice made me think of American literature masters like Mark Twain and Edgar Allan Poe I was forced to read in high school. The difference was in school I still muttered about reading dead masters and times, but grew to love the descriptions, plots and characters that transported me to another moment in history. In “The Rapist” I read greedily to see where the book was going, totally engrossed in the story. The honesty and freshness of the words from the main character kept me glued to the page to see what happened to the man caught in the worst circumstances and an act of degradation to woman. That is about all I want to say about the plot. I understand Les’s reasons for not explaining the details. You need fresh eyes to appreciate it but that isn’t to say I won’t go back and reread it like other writing masters savoring it. It is one of those books that each time you read it, you find another kernel of truth, a pearl of wisdom. It has that many facets wrapped in rich layers of dialogue, characterization and setting that pounded with each of the rapist’s heartbeat. I was hooked from the first page.
Wendy Gager, author of A Case of Infatuation, A Case of Accidental Intersection, and A Case of Hometown Blues.

And one from Richard Godwin, who, incidentally gave me the single most exhausting and
thought-provoking interview I’ve ever been through…

‘I live in a small, dark realm which I fill out’. Jean Genet’s words in “Miracle Of the Rose”. And like Genet, Edgerton writes with lyricism and a sense of history of things that disturb, balancing through his superb style themes that may otherwise unsettle the narrative. Edgerton’s brilliant archaeological dig into the motivations of a rapist is an unflinching look at the darker recesses of the human psyche. There is nothing gratuitous here and it takes a command to achieve a narrative pull in such territory. It reminded me of John Burnside’s “The Locust Room” but it’s better written. Edgerton voices the demonic forces at work within his narrator’s head. He embeds the story with the protagonist’s need for redemption set against the backdrop of his life. "The Rapist" is confessional, poetic, unrelenting, and as real as the newspaper lying before you. It challenges the assumption that fictions need to censor the things people read every day in what is deemed factual. It is told in a style that situates it among the classics of transgressive fictions. Richard Godwin, Apostle Rising, Mr Glamour

And now some writer’s quotes:

First, writers on Hollywood. All of these are from Writers On Writing, compiled by Jon Winokur.

“I went out there for a thousand a week, and I worked Monday and I got fired Wednesday. The guy that hired me was out of town Tuesday.” Nelson Algren

“A dreary industrial town controlled by hoodlums of enormous wealth, the ethical sense of a pack of jackals, and taste so degraded that it befouled everything it touched.” S.J. Perlman

“I’m a Hollywood writer, so I put on a sports jacket and take off my brain.” Ben Hecht

“Hollywood has the finest brains in the world out there. But they’re up against all these vested interests, and vested interests are the very devil for the artist.” Frank O’Connor

“My principal feeling about Hollywood is suicide. If I could get out of bed and into the shower, I was all right. Since I never paid the bills, I’d reach for the phone and order the most elaborate breakfast I could think of, and then I’d try to make it to the shower before I hanged myself.” John Cheever

“The only –ism Hollywood believes in is plagiarism.” Dorothy Parker

“Itt was a hideous and untenable place when I dwelt there, populated with few exceptions with Yahoos, and now that it has become the chief citadel of television, it’s unspeakable.” S.J. Perlman

“Hollywood money isn’t money. It’s congealed snow, melts in your hand, and there you are.” Dorothy Parker

“Journalism is literature in a hurry.” Matthew Arnold

“The indispensable requirement for a good newspaper: as eager to tell a lie as the truth.” Norman Mailer

“Journalism is the ability to meet the challenge of filling space.” Rebecca West

And finally, for today:

“I once saw a woman on an elevator carrying a book of mine. She held the book backwards so I could see myself peering over her elbow. I found looking at myself very disconcerting and when she had left the elevator I had a terrible feeling that she was taking my face away with her, leaving me nothing to shave in the morning.” John Cheever

Hope you enjoyed these! More anon… 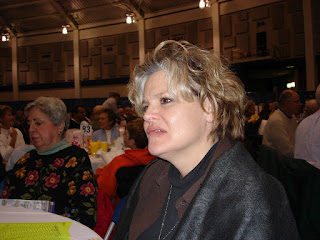 This is my wife Mary, who I always refer to as "Eye Candy" at the Notre Dame baseball banquet she and our son Mike and I attended one year. She's always a good sport going to all of our sports deals and pretending to like it... I am just one lucky doofus!