More writer's quotes and a couple prepub blurbs for THE RAPIST

First blurb is from Mark Ramsden, a British musician and novelist whose work you should check out.

If the narrator of Camus’ The Outsider had written an especially disturbing thriller it would be The Rapist - rock hard, darkest Noir, very fine writing, first-class storytelling.
An intelligent, proud psychopath on death row tries to win your approval, in the last few hours before the big sleep. You don’t like him but it’s impossible to stop reading.
While some of us tourists can sometimes concoct realistic stories from knowing criminals and having dabbled occasionally, Mr Edgerton has served time, giving him knowledge citizens prefer not to have.
Writers Helen Fitzgerald and Wendy Gager also had initial misgivings being associated with this title and a persuasive narrator. My name, for the few who know it, is already associated with unapologetic hard drug use, chronic alcoholism, a lightweight’s criminal record, sex work, (that’s where drugs can take you) and twenty years campaigning for consensual fetish sex. “This is supposed to be about him!” sorry, but if degenerates like me are squicked out by our unrepentant host, a cold man who looks down on those who empathise with other humans, you might feel uneasy about this book. Decent people should despise scumbag predators but that’s not a reason to avoid this gripping book.
I’m thrilled to have a new author over whom to obsess. It’s been a while since I discovered Ted ‘Get Carter’ Lewis, Elmore Leonard and Thomas Harris. Decades since I saw my first Tarantino. Les Edgerton belongs in that company.
Mark Ramsden, jazz musician and author of Radical Desire (Mandrake) TheDark Magus and the Sacred Whore, The Dungeonmaster’s Apprentice, The SacredBlood (Serpent’s Tail) War School(Troubador)

And here’s one from another Brit, the uber-talented Nigel Bird:

Les Edgerton’s ‘The Rapist’ is an extraordinary book.
In essence, it describes the events leading up to the protagonist’s incarceration and the time he passes as he waits his final dawn to arrive.
It’s written in a style of yesteryear and there are sketches that suggest a contemporary setting; what I feel the author achieves by this juxtaposition is to direct his thoughts to the human condition as it’s always been rather than it might be at any given point.
The main character is an intellectual. A pedant. A philosopher. He is in the middle of a war of attrition against the people he meets, himself and even more importantly with the reader.
It’s like being hit repeatedly by a blunt object as he cajoles and insists and backs up his arguments. There are even times when the guy seems convincing and these are the most disturbing sections of all.
There aren’t many modern books like this, I’m pretty sure. Though it may not always be a fun ride, there’s an element of satisfaction for the reader who takes this on in undertaking such a perilous journey.
I left ‘The Rapist’ battered, bruised and exhausted - what more can one say about a book than that?
Nigel Bird, author of Smoke, Mr Suit, In LocoParentis

Now—here’s some more of quotes from writers about all kinds of subjects.

“Fame is a vapor, popularity an accident; the only earthly certainty is oblivion.” Mark Twain

“First you’re unknown, then you write one book and you move up to obscurity.” Martin Myers

“When audiences come to see us authors lecture, it is largely in the hope that we’ll be funnier to look at than to read.” Sinclair Lewis

“It took me fifteen years to discover I had no talent for writing, but I couldn’t give it up because by that time I was too famous.” Robert Benchley

“Lolita is famous, not I. I am an obscure, double obscure, novelist with an unpronounceable name.” Vladimir Nabokov

“Little presses write to me for manuscripts and when I write back that I haven’t any, they write to ask if they can print the letter saying I haven’t any.” John Steinbeck

“It’s a short walk from the hallelujah to the hoot.” Vladimir Nabokov

“Grammar is the grave of letters.” Elbert Hubbard

“Any fool can make a rule and every fool will mind it.” Henry David Thoreau

“I don’t know any but the simplest rules of English grammar, and I seldom consciously apply them. Nevertheless, I instinctively write correctly and, I like to think, in an interesting fashion. I know when something sounds right and when it doesn’t, and I can tell the difference without hesitation, even when writing at breakneck speed. How do I know this? I haven’t the faintest idea.” Isaac Asimov

“Why care for grammar as long as we are good?” Artemus Ward

“You can be a little ungrammatical if you come from the right part of the country.” Robert Frost

“Grammar is a piano I play by ear. All I know about grammar is its power.” Joan Didion

“Word has somehow got around that the split infinitive is always wrong. That is a piece with the outworn notion that it is always wrong to strike a lady.” James Thurber 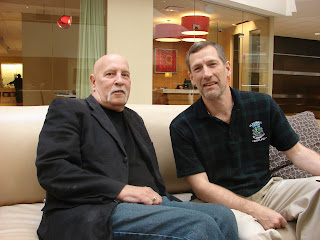 My agent Chip Macgregor and me hanging out. (I'm the good-looking one...)

I'm the young-looking one.

Hey, Les, you're getting some good press on the new book :-) To be honest, the title scares me a bit, but the reviews are very persuasive! I was especially taken in by Wendy Gager's review. Your book sounds like a top-notch literary contribution. Congrats!

Thanks, Salee! Don't know how to take it when a therapist fesses up to being "scared" by the title... Knowing you, I don't think you're scared by much of anything... :)