Today, it's my genuine pleasure to talk about my good friend Bob Stewart's newest thriller, recently released, titled FIRST BORN. Below is the review I posted in Amazon and Goodreads. 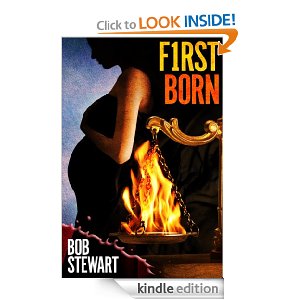 Bob Stewart made a national name for himself with his bestselling true crime books such as NO REMORSE. He’s doing the same thing these days with his thrillers.

Stewart delivers one of the most chilling murderers in contemporary fiction with the introduction in FIRST BORN of Percy Kilbourne, known to most as “No Mercy Percy” Kilbourne, who misspells his own last name as “Kill Born” to reflect what he sees and owns as his evil destiny. What Stewart has done here is nothing short of remarkable. He has turned the plot of Pygmalion upside down and created a character who began as the white-trash rapist in Deliverance and is transformed during his stint in prison into a smooth, cultured, educated, sophisticated guy who can charm preachers and old ladies out of their socks, while creating a personal apocalypse for those he has vowed vengeance against. Sent to prison by a jury bent on ridding society of a murderer, even when presented evidence that legally he should be set free, No Mercy Percy gets set free by the same lawyer who served as jury foreman for his conviction… and sets out to destroy the lives of all who sat in judgment on him.

Over and over again, while reading this novel, I kept thinking of Robert DeNiro’s portrayal of Max Cady in the remake of Cape Fear. I’ve always thought of that performance as the best depiction of the single scariest villain in any movie or book—much more frightening even than Hannibal Lector. Well, Stewart’s No Mercy Percy is the guy who could take down Max Cady. He’d have him for breakfast. To steal a line from one of my own stories that seems apt: Wherever this guy was became the bad part of town.

This is one scary guy. You’ve got to read this book. And then, send letters to DeNiro’s agent. This is a role that was made for him.

That's the review. And you can take this to the bank--this is indeed, one scary dude!

I'm kind of worried now. Later this summer, Bob is picking me up along with our mutual friend, Carl Brush, and we're driving on to the Writer's Retreat Workshop in Minnesota where I'll be presenting and they'll be... drinking? Now I wonder if I should be in a car with a guy who can dream up people like No Mercy Percy...

I'm pretty sure I won't be dozing off...

Get his book. It's a winner.

Blue skies,
Les
Posted by Les Edgerton at 9:44 AM