REVIEW OF THE RAPIST FROM CRIME FICTION LOVER

I'm totally stoked! Just got a great review for my novella, THE RAPIST, from one of the most respected crime/noir sites in the world, the venerable Crime Fiction Lover in the UK! Here's what "RoughJustice" had to say. I have to confess I don't know what Rough Justice's real name is, but I've always found his reviews to be spot on and great writing in themselves. 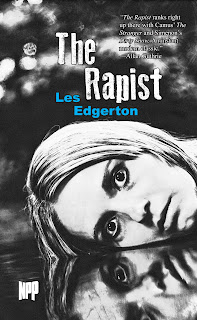 Written by Les Edgerton – Les Edgerton has written several acclaimed hardboiled crime novels and instructional books for writers, as well as teaching creative writing at the university level. But it’s inevitably his colourful past that interests me most. Back in his younger days he was a professional criminal who did time for burglary, and his experiences lead a certain authority to his writing.

However, anyone expecting something similar to the books of other famous writers with a criminal past – Edward Bunker, author of The Animal Factory, for instance – is going to be surprised. The crimes here are more extreme and unsavoury than those of Edgerton or Bunker, for sure. But more than that The Rapist is a novel that defies convention in many ways. Leave your preconceptions behind, and you’ll be all the better for it.

The Rapist is narrated by Truman Ferris Pinter who is serving out his last hours on death row before his execution. We learn the circumstances of his crime – the rape and murder of Greta Carlisle. Prior to his crimes, he’d watched her having sex with three men in public while he masturbated, concealed behind a tree. The following day Greta came across him fishing in a secluded spot and after his awkward attempts at communication, she taunted him and revealed that she knew he was watching. According to Truman, she fell on a stone into the river and drowned while he walked off making no attempt to save her.

We learn some contradictory things about his childhood. His mother was overbearing and smothering, and his father was frequently away from the family home, but loving. There are hints, however, that his father was an addict who beat his wife and that Truman may have killed him in his sleep. As the hours pass to bring his execution nearer, Truman confides in us his plans. It seems that he developed the ability to levitate then fly as a child, and though these powers left him as he got older and lost his innocence, they have returned since he was wrongly incarcerated.

Truman truly believes that he didn’t murder Greta, merely let her die, and whilst he admits taking Greta against her will, it cannot be rape when he is so superior to her. His plan is to fly away on the morning of his execution. He will literally and metaphorically rise above the prison, society and their petty laws. He will then return to be executed, and show them how little their punishment really means.

Hopefully this gives you a flavour of this extraordinary book. At times it is nauseating, at others a little bewildering but always ambitious, imaginative and thought provoking. The tone if not the narrative puts me in mind of the disorientating Lew Griffin series by James Sallis, or The Eye of the Beholder by Marc Behm. No-one could pretend this is an easy read – I certainly wouldn’t – but kudos must go to New Pulp Press for publishing this brave and challenging book.

You can see where the author works by clicking here.

Thanks, RoughJustice and Crime Fiction Lover! You made my day!