I wanted to share my take on two books I've read recently that are just smashmouth great! 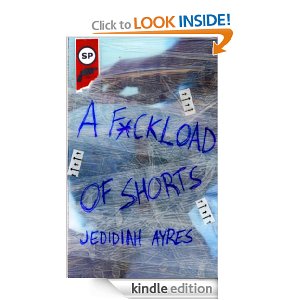 Jed Ayres is just the coolest dude! He's a well-known name in the world of noir literature and hosts the Noir @ The Bar event in St. Louis, which is legendary. He also writes a column on noir and crime writing for Barnes&Noble.  I got one of his rare invitations to participate and my wife Mary and I drove down and had one of the best times I've ever had. He's a terrific host, a wonderful person, and a brilliant writer and I hope I get to take part in a future Noir@Bar event in the future.

I've been waiting for this collection to come out for the longest time and the wait was worth it. An amazing, mesmerizing collection of darkness and human truth. Every single story here is brilliant, but I found a special connection to "The Whole Buffalo." A movie that rests within my top ten list is the black comedy EATING RAOUL (when I teach writing at the university level, I always show it for how to create black comedy), and Ayre's short story took the premise of that movie and rode it to a new level entirely. Now, I want an entire novel centered around this character.

Another book that blew my doors off was Tom Pitts PIGGYBACK. Reading this guy was like sitting in a cell in Pendleton, listening to my cellie tell a story. 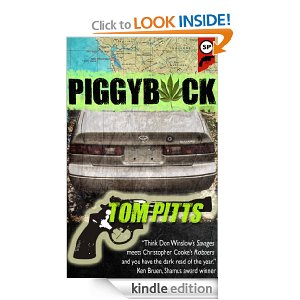 I was tempted at first to say something to the effect that Tom Pitt’s novel PIGGYBACK was “the best of noir,” but that would have been almost akin to damning it with faint praise. Like Nabokov, I don’t believe in genres. Like him, I think the only genres are “good writing” and “bad writing.” Well, PIGGYBACK belongs in that first group and I’d go beyond “good” to declare it “superlative” writing. I’m ranking it among my personal list of one of the best books I’ve read, period.

There are a lot of writers penning novels that are crime-based and centered around criminals. While many of them are entertaining and I enjoy reading them, this novel goes beyond mere entertainment and is a book that contains that rare verisimilitude that only those who’ve walked the walk can achieve. As a criminal of many years myself, I recognize those few writers who’ve actually lived on the dark side and Mr. Pitts is indeed, just such a writer and you can tell.

I’ve known his characters intimately. Up close and personal. And, I am positive that he does as well. It shows in the way he treats his characters and the choices he has them make. You can’t fake veracity, although there are lots who try. They can fool the straights but they can’t fool the ex-con. Jimmy is my ex-cellmate. He’s my old rappy. He thinks and he acts exactly like the way criminals act. His rappie Paul is a guy I’ve known many times in my own life as well. These characters—all of them—are as true as any characters ever have been. They’re real, man, and they’re not Hollywood in any sense.

PIGGYBACK will show you the true nature of the criminal. And, in doing so, it transcends genres. This is literature and of the highest order.


Keep your eye on these two guys. They're destined to become novas in the literary universe.