BOOK DEVIL REVIEW OF THE RAPIST


From Book Devil on Tumblr: 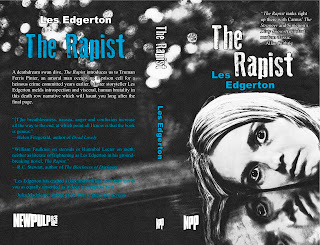 I doubt the term “philosophical crime novel” is something writers that write about crime writers sling about much, but the phrase is definitely and defiantly apropos of Les Edgerton’s THE RAPIST. The book is most assuredly a crime novel and so readers shouldn’t be frightened away by a description that makes it sound dangerously like a tome and frighteningly unlike a book, say, a highly readable but mightily singular piece of crime fiction. While THE RAPIST belongs on the shelf next to Dostoyevsky and the like, it also sits snugly and comfortably besides the gritty, bleak likes of Jim Thompson. Take some Thompson, a generous cupful, mix it with the brutal, barren cynicism of Jerzy Kosinski, then run it through a filter of Camus, finishing with a big chunk of Nietzsche’s attitude. Yeah, it’s got “existentialist” written all over it and flirts dangerously with the blurry line betwixt sociopathology and the mind of the ubermensch. Again, I’m scaring you. This is a lean crime novel, vastly more readable than the cumbersome Dostoyevsky. It’s all told directly to you from the central and, with fleeting exceptions, the only character, the rapist himself. The reader gets an unsettling time spent inside the head of a sociopath. It’s a heady experience. While the prose does at times try too hard to be proper and arrogant, THE RAPIST is a cunningly written piece of brain-shock prose. There’s even twist at the end, but it’s unlike any twist you’ve ever encountered in a strictly traditional crime novel. That I can promise you. That, and a terrific read.