BR STATEHAM HAS A NEW ONE AND IT'S TERRIFIC!

My good friend, author B.R. Stateham has just come out with his latest novel in the Turner and Frank series.

My buddy, B.R. Stateham. My question to him is: Where do you find someone old enough to remember how to cut a flat-top? I mean, besides me? 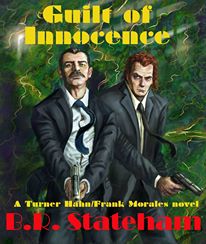 Here's the skinny on BR's newest:

Turner Hahn and Frank Morales Are Back

Homicide detectives Turner Hahn and Frank Morales are back on duty in their new novel, Guilt of Innocence.

The two are investigating a couple of murders which pushes them to the limits of their wits. One case involves the death of a very successful corporate lawyer. A high priced corporate lawyer who happens to be married to a woman who heads the largest cosmetics firm in the country. How the murder took place is perplexing enough. But as more bodies begin to drop Turner and Frank soon realize they are facing a maniacal mastermind who may very well be smarter than both of them combined.

Twists and turns, dead ends and red herrings . . . with an ending that will truly be surprising. This case has it all. And this is only case number one!

Case number two involves the disappearance of a young girl fifteen years earlier. A Cold Case File. Except it is not a cold case any longer. The girl has returned. And now lies on a cold metal table in the morgue. Someone has gone out of their way to make the homicide look like a suicide. Apparently a crime syndicate is frantic to make sure neither Turner nor Frank find out the facts surrounding the girl's disappearance fifteen years earlier. A hit man is in town grimly eliminating everyone who may have known the girl. A hit man with orders to possibly rub out Turner and Frank as well.

And again the real killer is someone whom no one would have ever suspected.

Turner and Frank are at their best. Dry wit, interesting characters, lots of action, vivid imagery, and two genuine classic mysteries. All of it can be found in Guilt of Innocence. Find it anywhere ebooks are sold.

B.R. Stateham is a sixty-four-year old curmudgeon who writes genre fiction. (What makes him a curmudgeon is wandering all over town trying to find someone who can cut a flat-top...) With an antiquarian's body yet with the mind of a fourteen-year-old boy, the author's imagination still wanders down dark alleys and mean streets looking for a dangerous rendezvous (or an old, old barber...) or dons a Federation uniform and straps on his waist a 20 megawatt laser blaster to go out and hunt Martian grave robbers.

These are great reads! Hope you folks check this one and the others in this series out.

P.S. Gotta give a shout-out to another good friend, Richard Godwin, who just gave an interview to the BBC for his forthcoming brilliant novel, ONE LOST SUMMER, which I'll be reviewing here the day it comes out. Check it out HERE.