Couple of recent publications in which I’m involved. First, is the notice by Grift Magazine that their second print issue of the magazine is now available. I’m very proud to be included. 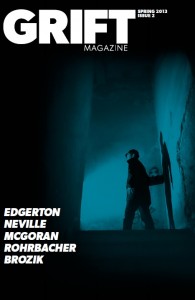 The second issue of Grift is now available!

Believe me, it was worth the wait. The issue includes an exhaustive (yet incredibly captivating) interview of Les Edgerton, another with Stuart Neville, and a look a the film noir woodcuts of Loren Kantor.

The second is the highly-regarded blog by Ben Lelievre, Dead End Follies 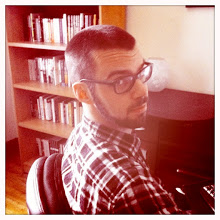 "You got three weeks, huh."

He was talking about my parole hearing. "That's right"

Everybody always says that. It's jealousy, that's all it is.

If you've followed my coverage of the release of Les Edgerton's THE RAPIST, you know he's an unusual creature in the crime fiction landscape. He is half-writer, half-character. Your run-of-the-mill writer could never imagine a character who has lived through what Les lived. I know what you're thinking. This calls for a memoir, right? Well, Edgerton has one...or he almost does. JUST LIKE THAT is many things. It's a novel, first and foremost, but it's also a memoir, a thinly-veiled true crime book and a user guide to separate what's real from what's bullshit in today mainstream fiction portrayal of prison environment. Fortunately, it's also a pretty good story.

JUST LIKE THAT doesn't really have a beginning or an end, dramatically speaking. It's not a construction, built from a series of events, that reaches a confrontational boiling point. It's just a chunk of time in protagonist Jake Mayes' life where he was in and out of prison. Edgerton mentions in the foreword that several parts of the novel were published as short stories and it shows. Every chapter is so well-defined, it could be a story in itself. Better yet, I'm sure some could craft a novel using one of JUST LIKE THAT's chapters as an inspiration prompt. Since every chapter/stories share the same protagonist and that they are in chronological order, it works fine as a novel also.

You could call JUST LIKE THAT metafiction, I suppose. The foreword and the afterword are an integral part of the novel's enjoyment as Edgerton explain most of this kind of happened and he refuses to tell you what's real and what's fiction. That gives the reader perspective on his own crime fiction culture and adds a layer of fun to the reading process as you're always trying to guess where is the line between reality and fiction. Reading JUST LIKE THAT is an active process. It's not a story that delivers itself to you straightforwardly. It's something that's anchors in reality, in Les Edgerton's persona, and finishes on the pages of the novel. Yeah, I guess it's crime metafiction after all.

"You ever get scared?"

"Well, there's time's when I'm more cautious than others if that's what you mean."

"Fuck it, Jake. I'm askin' you a serious question. You ever been scared of anything?"

Before I could answer and maybe because he really wanted an answer and knew I wouldn't admit it - having fear, that is - he said, "I been scared most of my life, Jake. You believe that?"

There are a lot of quiet, almost intimate moments to JUST LIKE THAT, which were my favorite parts (see what I just quoted). Parts where Edgerton seems to break the fourth wall and explain his philosophy on things himself. I have never seen the borderline animalistic nature of the criminal spirit explained so well. That surrender to your darkest impulses of destruction. It sets the tone for the whole novel, which is light on outward emotion, but not without a heart. That's just how I like fiction. Seldom tender, but never mushy. Male friendship is also a strong theme in JUST LIKE THAT, the peculiar, reticent way men show appreciation towards one another and stick together.

You can't really put an etiquette on JUST LIKE THAT. Just stick it it on the mystery section shelves of your bookstore and let the readers make up their mind. Les Edgerton often says he went to the Jack London School of Writing, so it makes JUST LIKE THAT his master degree thesis. No matter how you want to call it : metafictional, autobiographical, picaresque or criminal, it's mostly a great story about being a human being in the darkest corners of America. It's not anything precise, yet it's not difficult to love. 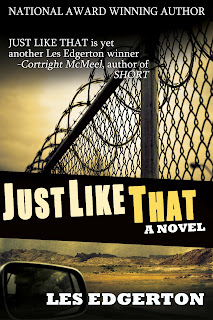 "JUST LIKE THAT is yet another  Les Edgerton winner. Mr. Edgerton in his prison memoir conjures up in honest, Bukowski-esque prose a mad dog life lived behind and beyond the bars of institutional correctional facilities. Literature's version of Johnny Cash, America has yet another gifted bard to sing the blues of time served.

I have long believed Mr. Edgerton to be an American original, who has for too long remained one of our best-kept literary secrets. As a publisher I want to put to print whatever he writes, as a reader I want to devour the pages, as a writer, I'd be happy to pilfer just a few of his lines."

Blue skies,
Les
Posted by Les Edgerton at 11:14 AM