Sorry to have been gone so long, but my son Mike and I had a week's vacation in Cave Creek, AZ as guests of my best friend, Tom Rough and his family, wife Lisa and daughter Nicola. It was wonderful! Mike and I and Tom got to go to a Giants' game where we beat the A's and I got to meet up with some of my class members at Federal Pizza. 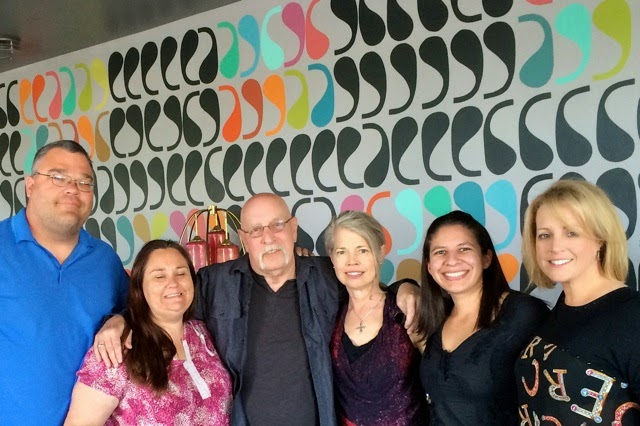 Joe and Maegan, me, Linda, Suzanna and Kristen--all uber-talented writers and fantastic friends. Well, Joe isn't a writer but he takes the load off Maegan so she can write and he's just one of the nicest guys I know.

When I got back home, I needed to plunge right into the new session of my online class and that kept me busy until yesterday. I owed a friend a chapter for a new crime book he's asked a bunch of us to contribute to and that leads us up to... today!

Where, when I opened my email this morning, I received the following post from the brilliant writer, Lilly Hellman. Her words warmed the ol' cockles of my heart and I thought I'd share them with you.

I was at a Christmas party two years ago at which WGN  news anchor Steve Sanders was also a guest. We started to chat, and when he found out I was a crime writer he told me he had a story for me. Those words are like catnip for a kitten — I’m a sucker for a good story. So I followed Steve into a corner where he proceeded to tell me about a Ku Klux Klansman in Alabama who was in prison for lynching a black man. A few years into the Klansman’s sentence, a young black man was wrongly convicted for raping a white woman. No one really believed the boy was guilty, but the jury was all white (it was the early Sixties), and the kid didn’t have a chance.

The young man apparently was assigned to the same cell as the Klansman, and over time, the two became great friends, confounding the expectations of almost everyone in the penitentiary.

I don’t how much of that is, or was true, but it stayed with me. A few months later, I had an opportunity to submit a story to the Fiction River Crime Anthology edited by the wonderful Kristine Rusch and Dean Wesley Smith, and I decided to tackle that story. However, aside from a couple of visits to Cook County jail and a woman’s minimum  prison in Racine, Wisconsin, I am woefully unfamiliar with prison procedures. So I put out a request on Facebook for someone who might point me in the right direction. One name kept coming back; Les Edgerton, a terrific crime writer and himself a one-time inmate at Indiana’s Pendleton penitentiary, which had the honor of being called out by LBJ in the Sixties as one of the worst prisons in the country.

I got in touch with Les, read his book JUST LIKE THAT, which recounts his experiences at Pendleton (and which I highly recommend.)  After that, we emailed and spoke on the phone several times. Les’s patience and generosity was endless, and I am in his debt. There is no way this story could have been written without his help.

Of course I embellished, changed, and added some noir elements to the story—I was in my dark period. The result is No Good Deed which amazingly, did make it into the anthology released this week.

I am delighted to share space with acclaimed authors Doug Allyn, Brendan DuBois, my good friend Julie Hyzy, Steve Hockensmith,and more, and I urge you to check out the anthology. Meanwhile, here are the first few grafs of the No Good Deed.

Gertie Morton’s baby kicked so much in the womb that she knew the kid was going to be a troublemaker. Luther didn’t disappoint. Born in 1943, the colicky baby screamed so much that Gertie thanked the Lord their closest neighbor lived half a mile away. Once the colic was over, teething began, and Gertie gave Luther liberal amounts of whiskey that her husband cooked up in their still.  She sometimes wondered if that was the root of Luther’s problems.

Luther grew into a rowdy boy and even rowdier teen: stealing bikes, then cars, then whatever he could get his hands on.  Which wasn’t much—they lived in a dirt-poor area of Southern Indiana. Luther wasn’t much of a student either, until a sheriff’s deputy caught him smoking and drinking whiskey at the pool hall. Luther seemed to clean up after that, and Gertie was surprised when he came home with a decent report card in twelfth grade. She proudly proclaimed to everyone she knew how he was one of the best students in the school.

She learned the truth a few months later when Luther told her that his high school English teacher was a member of the Ku Klux Klan and had recruited him into the group. Gertie remembered the problems the Klan had caused in Indiana over the years, and while she didn’t exactly disagree with them, she didn’t think it would end well.

It didn’t. A few weeks after Luther’s twenty-first birthday, he was convicted of taking part in a lynching. Sentenced from fifteen to life, Luther was sent to the state prison at Pendleton near Indianapolis.