SPINETINGLER MAGAZINE REVIEW OF THE BITCH

I returned from a grueling two weeks in Texas yesterday and am thoroughly exhausted. It was one of the most intense periods of my life, both for the quality of the two writing events I was privileged to present at and the unfortunate decline of my health. I have COPD and it really accelerated during my stay there. I'm still exhausted and trying to recuperate so won't post much today and will try to post more about my time at the DFW Writer's Convention in Dallas and the WRW event at the Purple Sage Ranch outside of San Antonio, and my time spent with my buddy Bob Stewart at his house in San Antonio as soon as I get some strength back, but wanted to share something that I got while at WRW a couple of days ago--a wonderful review of The Bitch by the awesome Spinetingler Magazine that really perked my spirits up just when I needed a lift.

Below, is the review that Peter Dragovich, the Nerd of Noir, posted in Spinetingler.


The Bitch by Les Edgerton – review 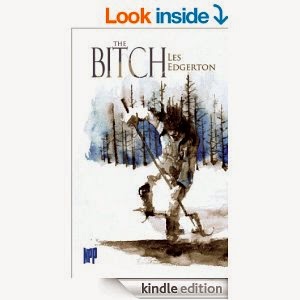 Les Edgerton’s The Bitch is a straight-up old-school noir novel that will pin your ass to the break table at lunch at make you late for work.

It’s a story told by ex-con, now-hairdresser Jake Bishop, a guy on the verge of living the American Dream. He’s got a beautiful wife, his own house and he’s about to open his own salon in South Bend, Indiana. But then Walker Joy, his old cellmate from Pendleton, comes asking for a favor: help him rip off a jeweler at the request of another jeweler who has some shit over Walker Joy’s head. At first Jake begs off but then Walker ‘fesses up that this jeweler has shit on Jake as well. Now Jake has to risk losing everything in order to get out of this jam alive or worse: catching “the bitch” of the title, the life long prison stretch that inevitably happens following a criminal’s third felony.

Edgerton sets all this up masterfully and then brings the hurt down on Bishop one catastrophe after another. If you’re worried in the early stretches of The Bitch that Edgerton won’t go “full-dark” (as the Nerd admittedly was) let me put your fears to rest: this shit gets truly fucked up in act two and beyond fucked up in act three. So if your idea of a good time with a book involves stomach problems (which we all know is the only type of reader who would look to the opinion of some asshole calling himself the Nerd of Noir), then The Bitch should be the next beast perched atop your TBR pile.

I was really hurting when this appeared on my puter that morning and it helped put a new spring in my step! Thanks, Spinetingler and Peter Dragovitch!

Blue skies,
Les
Posted by Les Edgerton at 10:19 AM

The Bitch is one of the best novels I've read in the last ten years. Everyone needs to read it. I can see the movie. It is wonderful. I hope you feel strong soon. Take care and rock on.

Thank you so much, Sarah. Can't wait to see you and tell you all about Texas!

Maybe we can plan on Friday. I'll call again. Great to hear your voice.