Review for THE DEATH OF TARPONS

A really thoughtful article about my first novel, The Death of Tarpons, just came out yesterday from the Betimes Books blog. The writer, Hannah Keane, really did a bang-up job and one of the things that impacted me emotionally was how she came up with photos from my hometown of Freeport, Texas where the story was set, one in particular, the shot of the Tarpon Inn which I saw every day of my life. It was at the end of the town square where my grandmother's bar and taxi company sat. They say a picture is worth a 1,000 words and in this case it was for me. The day that photo was shot, I know I had looked at the building as I did every day. It put me right there and I could smell the shrimp in the air and just evoked a powerful, powerful memory! 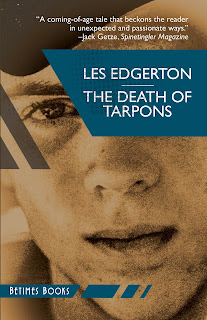 
The Death of Tarpons: A Journey into darkness

By Hannah Keane
On the occasion of the new release of Les Edgerton’s debut novel, The Death of Tarpons, in paperback format by Betimes Books and in electronic format by Endeavour Press, we are taking a look back at what makes Edgerton’s first work of fiction so special. For something which, at first glance, seems so different from his later works, how does it fit so seamlessly in Edgerton’s body of work?

First published in 1996, The Death of Tarpons stands out in Edgerton’s repertoire for how different in tone it is from his subsequent novels. To many, Edgerton is known as an acclaimed crime writer, but his most loyal fans will also know that he has never wanted to limit himself – or be limited – to one genre of writing: from short story collections like Monday’s Meal to young adult fiction such as Mirror, Mirror and plenty of non-fiction, Edgerton has explored writing in its many forms.

Consequently, it should come as no surprise that Edgerton’s first piece of writing is a touching coming-of-age story about a young teenage boy trying to build a better relationship with his father.

“Then, last year, I got this fantastic idea to do something totally on my own, in secret, that would show him once and for all I could do something mechanical. Manly. Then, he would love me and be proud of me and put his arm around me. I decided to build a boat. For him.”

This sounds as far removed as possible from other works like The Rapist or Just Like That but, as one reviewer and fellow author has mentioned, the seeds of Edgerton’s later fiction can indeed be found here.

“Edgerton’s later novels have become Noir classics to many, and ‘The Death of Tarpons’ hints at a moonless childhood that explains the author’s successful literary journeys into darkness.”
– Jack Getze, Spinetingler Magazine, 2017

In The Death of Tarpons, young Corey certainly encounters many episodes of darkness. Nearly all of the personal relationships around him are afflicted with violent outbursts or psychological abuse: the regular beatings of his best friend, Destin, and his mother at the hands of his drunken father; the violent reprimands Corey endures from his own father as well as the emotional neglect he and his mother receive from Corey’s father – a neglect that has driven his mother to religious fanaticism.

“Every atom in my body was in fear. I had never seen such a look on his face as there was now, not even at his angriest. It was like the face of God Himself, the face the fire and brimstone preacher Mom listened to, conjured up, Sunday mornings.”

Thus, the darkness one would expect from Edgerton’s work is present in his debut; however, it is tempered by the sweet nature of its protagonist and the loving relationship Corey has with his grandpa.

What allows Edgerton to write across different genres with such success is something that all his works have in common: an honesty that can only come from personal experience. Edgerton has described The Death of Tarpons as being “85% autobiographical” and as being a work which was long in the making, having started writing it at the age of fifteen. The setting of the novel – 1950s era Freeport, Texas – was a place where Edgerton spent part of his childhood and many characters are drawn from real life with, for example, the author’s own grandmother being just as successful and driven a businesswoman as the Grandma character featured in the novel. Just as Edgerton’s own experience as an ex-con gives a realistic edge to his crime fiction, the same truthfulness can be found in his debut.

“The Oyster Bar. The business that had sustained three generations, mine and my sister Doc’s, my parents, and my grandparents. The business that, along with the taxi cab company, my grandmother had created and ruled as her own private fiefdom. Not with some metaphoric iron hand, but with a very real Navy Colt long-barreled .45 on the dash of her taxi”.

Honesty and credibility are what make Edgerton’s writings so distinctive and evocative. When reading The Death of Tarpons, one can really visualise what it was like being a young boy, just out on summer vacation with lots of great plans for how he was going to spend the holidays hanging out with his best friend, fishing with his grandpa and getting closer to his dad.

“All the way downtown, I used lawns, head down, alert for nettles and stickers. When I had to cross a street, leave the coolness of grass, I ran faster, landing on different parts of the soles of my feet. First-day-of-summer-vacation-tootsies were too white and thin-skinned for concrete baked at ninety-plus degrees.”

As with the rest of Edgerton’s work, the vividness of his characters and settings is a result of his personal knowledge of what it was like to be a young teenage boy growing up at this time in the American South. The credibility that comes from writing about places and situations one is familiar with is what gives The Death of Tarpons, as well as Edgerton’s other novels, a distinctive edge. 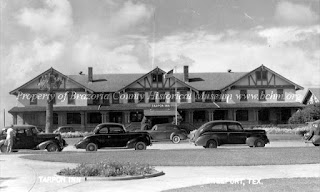 
Thanks for reading her article. Hope that if you glom onto the book, you'll enjoy the read!

Blue skies,
Les
Posted by Les Edgerton at 6:27 AM