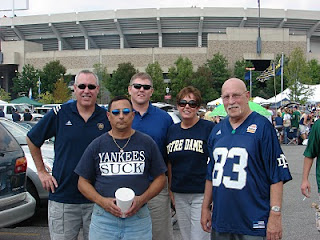 T
This photo represents incredible tension. This was taken just before a Notre Dame game a couple of years ago. Would they win or not? All I can say is we weren't smiling after the game... At least not until we got back to the cooler...
Posted by Les Edgerton at 2:26 PM

Hi Les,
Thanks for stopping my blog, Beyond the Gray! I'm so glad that I found your book, Hooked, and that you directed me to your blog. I learn so much every time I read your work. Your passion for writing is infectious...keep up the great work!

Also, thanks for adding Beyond the Gray to your blogroll, I really appreciate that! I've added your blog to mine as well.

Wow. I am bookmarking this lesson AND printing it for my writing file. I think I need to read it about twenty more times, though. Maybe the lesson will float through my pores and out the tip of my pen! Well, a girl can dream, right?! :-)

Les, I just directed my writing class to this post.

Thanks, folks! Glad you enjoyed it. Wish I could take credit for the wisdom here, but a lot of it I took from other writers. We've got such a giving community of folks who help each other out in this journey.

Hey, got a new agent (Chip MacGregor) so hope I'll have some new stuff out in the bookstores in the next year or so. I'll keep you posted.

And, I'm still working on a workshop/retreat for next summer and hope to have something to announce soon.

Thanks so much for staying tuned in! You guys rock!

another blazing post Les, wow you're stuff is so useful. I've pasted it into a word file and will be reading it again in bed for the next week (drip feeding my small brain!)

I don't know how that happened! (Repeating a msg three times.) My bad...