Sorry for the last-minute notification, but it had completely slipped my mind until now! If you get a chance, I'll be chatting with Susan Wingate on her podcast/radio show today at 1 PM EST. Click on  the link.

If you can't make the broadcast live, you can go to the link and listen any time that's convenient.

Another of our classmates sells her book!

I love being able to report on great news like this. Yet another of our classmates in my online novel-writing class has sold her first book! This is the second one this year, following Todd Monohan’s success story earlier in the year when he sold his first novel, The Vexing Heirloom.

Welcome the world of published novelists, Linda Thompson, with her magnificent book titled, The Plum Blooms in Winter, to be published by Mountain Brook Ink.

Here. I’ll let Linda make the announcement in her own words as she did via an email to me yesterday when I asked her for details.

Hi, Les!
Yes yes YES, it’s true!! Sorry, I HAVE been meaning to write you… because I’m deeply, deeply in your debt—no one has meant more to my writing career than you have!

I have a three-book deal! The Plum Blooms in Winter is supposed to launch in January 2019, and I’m contracted for two more books after that.  I’m delighted to work with the team at Mountain Brook Ink. They produce outstanding books.

Given that it took me six years to write book one, I am kind of nervous about having just 15 months to deliver book two. Granted, I’ve been well schooled now– I sure had a lot to learn when I started out! But I know I need to get really serious about my daily word count goals. And as always, there’s a lot of “life” going down, so it’s a challenge to balance everything.

Yes, please give a big shout-out to everyone in class, who’ve been so amazingly helpful in this process! And to yourself—I really do owe anything I’ve achieved as a writer to you.

And much love to you, Linda! It was Linda who found and arranged for our class’s site on the Intergnat, and who has maintained it for us for the past six years. She’s been one of our most faithful class members, showing up each and every week to send us her work and to provide her commentary on her fellow classmate’s work each and every week. She began with me when I taught the novel-writing class for Phoenix College way back when and came with me when I began our current class six years ago. She’s family!

Even though it took her six years to write her first book, it has nothing to do with her being a slow writer. On the contrary—it’s taken this long only because she’s a perfectionist. She has always made sure every word was the right word and she is a throwback to writers of yore—she has rewritten every page of her book until it was, indeed, perfect. That’s rare today in the modern world of people of little patience and a proclivity for instant gratification. Linda is a writer’s writer and that’s the highest compliment I am able to give. There are more than a couple more like Linda in our class and like her, their day will come, too.

A three-book deal is becoming a rare event in publishing, especially for a first-time novelist. I suspect they didn’t see her first book as what normally crosses their desk from first-time novelists—Linda just approaches her craft with the kind of care and attention that’s more associated with a generation known for their attention to craft.

When the publication day comes, I’ll be sure to post it here. It’s going to be a big book—that I can promise! 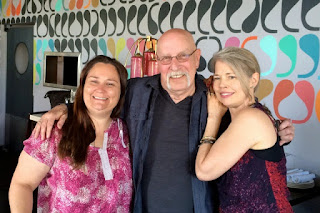 Taken last year on a visit to Scottsdale to visit my best fiend,
Tom Rough and got to spend a day with a couple of our
Bootcamp for Writers. On my right is one of our most esteemed graduates. Maegan Beaumont. and on my left is today's star--Linda Thompson.

P.S. Update on Todd Monahan! I got an email from him the same day I got Linda’s. Here’s what
Todd had to report—more exciting news! I’d asked him about a  report that his first novel was being considered as a possible film. 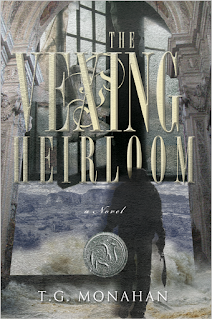 Great to hear from you, and I hope your recovery is progressing.

Through a mutual relative, I was put in touch with a woman who works in Hollywood, as a contact and possible conduit to a studio that might be interested in the project. She wrote me a letter, which I posted on Facebook, saying that she likes the book, but that it would be a hard sell because it's not an established brand yet. But, she said, if the right producer/director comes along, she thinks it would be perfect for screen treatment. So that's pretty much where I'm at.

On another positive note, I am about 4/5 done with my next novel and I'm looking at a Summer 2018 release. It was originally intended to be a YA coming of age novella (think "Stand By Me" meets "A Christmas Story") but the project has grown and changed to the point I think it will be marketable to adults, too.

Another funny thing: a few weeks ago, my publisher asked me to review a potential author's manuscript and give critique, much like we do in your class. The woman has ability but the story was nonexistent, structurally, and needed a lot of work. I tried to explain the concepts as you taught me, of surface problem, story-worthy problem, inciting incident, etc. She got very angry, told me I didn't know what I was talking about, and pulled the project from us. Just underscores that not everyone is ready to hear the truth. I am glad I had you for a teacher.

How have you been? How is the class and how are the other writers?

Cool news, Todd, and we’re glad we had you for a classmate as well! As you can see, your classmates are doing well. Several more have finished their novels and we’ll be posting more success stories in the near future.
Posted by Les Edgerton at 12:28 PM 1 comment: