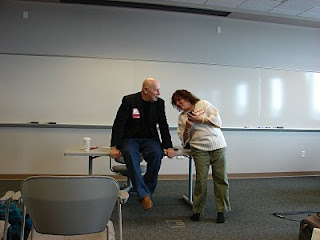 That is remarkable, indeed. I'm an editor and most stories get at best 3 pages from me. But in my genre, speculative commercial fiction, I like to see the story problem exposed in the first 250 words. That's my most oftenest reason for rejection. (Sometimes if it doesn't appear in the first 250 words it NEVER appears.)

I agree, Betsy. I've been an editor at other litmags and other magazines, and it's more usual to let the editor read as much or as little as he or she wanted to before making a recommendation. Tim was a really decent guy who wanted to give writers every possible chance.

But... at other places, I did what is more the norm. I'd read a couple of sentences, maybe a paragraph or two of most stories.

One thing I hardly ever did was read cover letters. In talking to other small magazine editors, I've found that many of them don't either. The only time I read the letters was if I was going to recommend the story.

One time, I read a cover letter for an entirely different reason. The mss was sent on a carbon copy in onionskin(!), and even the copy had significant wear on it, indicating it had been recycled. I rejected it because it was really a poor story, but something about it "felt" familiar. It had one of those "voices" that I recognized from somewhere but couldn't place. I pulled the cover letter and almost had a heart attack. It was from a very... and I mean, VERY well-known writer. And, it matched the story. It was arrogant and presumed I was going to take the story as she had "deigned" to send it to us. I took great pleasure in rejecting it with a form letter.

Her name wouldn't have influenced me either way and if her story had been good I would have accepted it even after her kind of snarly cover letter, but I was really glad it was so bad. I suspect I'm probably the only person who had ever rejected her at that stage of her career. Wish I could tell you who it was, but just can't. I guarantee you'd know the name instantly as would every single person reading this. I still remember that particular rejection with fondness... Most of the time I hated turning almost every story down, but not hers...

This is really interesting. In my little stint of doing this in a certain class at a certain college, it was hard for me to accept just anything. Each submission needed three votes of Yes, but some looked awful and it was hard to get past the appearance. Most times the fonts were insane. One guy did one ransom note style. Another sent a submission in that looked like he spent more time coloring the cover with markers than he did the actual writing...O_o I never saw that one. I think it got pitched before anyone could see it.

As for the writing itself...I was always on the fence for a lot of them. So I was always writing the equivalent of Another Reader on there. I guess my thing with the litmag stuff is that I just didn't know enough about the genre I encountered the most. I knew what I liked, but that didn't mean it was good.

How do you get past your personal likes and dislikes to be objective?

I glance over the cover letters afterward, rarely look at them beforehand. I'm a quick reader, so I can skim them pretty quick as I'm pasting in our standard rejection. Hate to put it that way, but it's how it is.

I don't think the question is aimed at me, but I don't worry too much about my personal dislikes and likes. I'm there as a subjective bouncer for our readers. Working for myself helps in that regard. :)

thanks for the write ups! I was very intrigued by some of those.