Hi folks,
As some of you know, I recently was invited by Lia Keys to be a guest blogger on her really terrific blog, ScribeChat. Lia  has graciously allowed me to repost the article here and I hope you enjoy it. She also invited me to participate in a webcast on the same topic and you may want to visit her site to see a transcript of that as well as the comments the article generated. To get there, just click on http://scribechat.com/archives/2620 or go to the link on this site to her blog.

Hope you enjoy this and find it helpful! 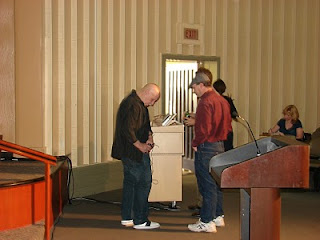 Getting wired before my presentation on the movie THELMA & LOUISE at this year's Microburst at Phoenix College.

, says about resolutions: “Here the epiphany, a memory leading to a resolution, has been triggered by an action and sensory details that the reader can share.” (Italics mine.) It’s a scene that can’t depend on conversation to make it work. It can’t, for instance, have the protagonist talking to a priest who then convinces her of a truth, and that gives her her epiphany. The resolution has to be triggered by an action—and an “action” in this case, isn’t dialog. It has to be a physical action.
What’s the physical action in the ending of T&L? That’s easy. They’re just been chased and are now surrounded on all sides by cops who are ordering them to put their hands up or get killed. Surrounded on all sides except in front of them, where the Grand Canyon lies. Sensory details? Plenty! Cops jacking shells into carbines, a helicopter’s rotors swirling dust, an authoritative voice over a bullhorn demanding they surrender. No way out, except… This triggers the epiphany for Thelma. And, what is the memory that leads to a resolution for her? Again, easy. Even though we can’t see it in the film, we understand what’s going through her mind. The memory of Darryl and her abusive relationships, and, even more important, the new knowledge that her entire world is controlled by men as evidenced by what’s happened in their journey. Selfish men, like Darryl, evil men like the tanker truck driver and Harlan, the would-be rapist, manipulative men like J.T., and even good, moral men, like Hal and Louise’s boyfriend, Jimmy. But… all men. At the very end, Thelma realizes her surface problem (getting free of Darryl, even if just for a weekend) is only symptomatic of a much bigger and deeper, psychological problem for her—having to exist in a male-dominated world with no voice at all. She didn’t know this at the beginning. In the beginning, she was only aware that Darryl was a shit. In the end, as a result of everything she’d gone through, she finally comes to the realization that Darryl was only a small part of what she faced in society.
And so, she does the only thing left for her to do. She and Louise tacitly agree to commit suicide. They seal their decision with a kiss and then hold hands as they hurtle into infinity. And, that, satisfies the two elements in a quality ending, by providing both a win and a loss. The loss? Easy. She gives up her life. The win? Again, easy. She achieves her independence from men on her own terms. It cost her her life, but the tradeoff was worth it to her.
This is a fairly common ending. It’s seen, for instance, in Toni Morrison’s novel Beloved, where the mother kills her child to keep her from having to live in slavery. It’s seen in any number of war novels where the protagonist gives up his or her life to preserve a way of life for loved ones.
This doesn’t mean protagonist have to commit suicide to achieve a good ending. This is just one of countless possible endings. But, however you end your story, just make sure it contains both a win and a loss for the protagonist. That’s key.
What’s interesting about this movie is that some of the studio execs wanted to change Khouri’s brilliant ending to a typical Hollywood “happy-sappy” ending. One where they surrendered, spent a few years in prison, and were released to live out some kind of Stepford wives’ existence ever after…
Thankfully, she stood her ground and they released the intelligent version!
Hope this helps you in creating your own endings. Hope to see your work on the shelves of Border’s and Barnes & Noble!
BTW, if you’re interested in seeing how actions can inform character arc, you might want to look at a post I have on my blog where I again use this movie to illustrate that technique.
Blue skies,
Les Edgerton
Posted by Les Edgerton at 10:35 AM

Another great post, Les. Would it be true to say that the surface story problem is what people sometimes call the external conflict, and the story worthy problem is internal conflict?
The fact of novel ending having to be revealed through a scene with action rather than just a person 'realising' it is very powerful, and makes a lot of sense.

Thanks, Sally. And, yep, they're one and the same. I just kind of came up with another way of putting it that I hope may be easier to understand for some.

As for revealing the epiphany, I can't see any other possible way to achieve or show that other than through a scene. Just can't be a character thinking about something unless it's triggered by an action.

Hi Les, I really enjoyed your twitter presentation on ending, and this post was excellent. Lots to consider. Thanks.

Les, you are such a deep well of wisdom and so generous about sharing it! I'm delighted beyond measure that you were able to join us at #ScribeChat and everyone has been impressed by the depth and detail of your responses to their questions on The ScribeChat Review.

Thank you so much for your wonderful contribution. I suspect you have gained quite a few new fans, including me!

For those of you who'd like to read Les' detailed responses to questions left for him at The ScribeChat Review, here's the link to the comments section:

And Les, any time you feel the urge to come back to #ScribeChat I'd be thrilled to have you!

I'm learning from you, as usual, Les. This post helped me straighten out my ending in my mind. Great stuff! Keep it up. : )