SAMPLE OF A QUERY LETTER THAT WORKED 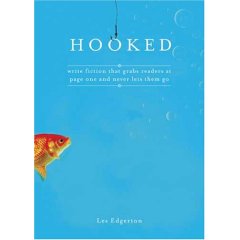 What great advice to remember how much fun you had writing the book and to convey that same excitement to the agent. I can imagine agents must get bored to death reading cookie-cutter queries and probably really appreciate a letter with some originality. Thanks for another great post, Les!

Thanks, Susan. I understand why writers try to follow the rules, after reading all the blogs where agents post examples of what they fell are "too stupid to live" query letters. We've put our blood, sweat and tears (to use a cliche, I, for one, never get tired of hearing...) into our work and then get intimidated into writing these boilerplate queries. And, I suspect there are agents out there who aren't all that experienced, who buy into the "Jerry McGuire's" out there because of their own uncertainties. I understand that there's a reason for promoting cookie-cutter queries--to keep the writer from writing letters that may harm their goal, but just use some common sense and send something that tells what the book is about and is halfway enjoyable to read. That's really about it. We're not splitting the atom or curing acne... The goal for some seems to be not to sell the book, but to keep from appearing on some blog as the latest example of Dumb Dora/Dan to be laughed at... Sad... It's always instructive to read the comments after these blogs are posted by some agents, to see all the lambs lined up to give a public chuckle at the poor sap's query letter and let the poster know that they're as "hip" and "knowledgeable" as the poster... Grow a pair...

I just found you at Glynis Smy's place and came over to meet you. I've skimmed through your post. Great writing! I'll be back when I have more time to browse through your site.

Welcome, Ann! Saw your blog (very interesting!) and see we're about the same age. Good luck on your new book.

Okay. I'm a complete idiot. I can't work out whether or not this is serious or a parody. Either way, it cracked me up.

I've actually left more confused than when I came though. :( I hope I'm not wrong for saying that.

Hi Tiffany--not sure what you're asking, but this is a copy of the query letter that resulted in 100% of those querying asking for the manuscript and the letter I got my agent with.

Main purpose is to show that sometimes people get all tied up in knots trying to copy whatever the latest book or agent blogpost on queries tells people is the "proper" form or content needed. Just want to show that what really triggers interest is a letter showing an interesting/entertaining book and a sample so they can see that that promise carries through. The sample is, I think, the most important thing in a query letter. A letter "tells" the agent/editor it's a good book; the sample shows whether or not that's true.

For example, many writers may say their book is humorous... but, humor is in the eye of the beholder. What some think is funny, when actually read, doesn't get so much as a smile. It's only funny to the writer. The sample shows the agent instantly if it truly is funny. Or... "gripping, suspenseful, poignant," or whatever the author claims. The proof's in the story itself and nowhere else. The query letter itself should reflect accurately by its language, the language and tone of the novel.

More... I didn't say this in the initial post, but it's important to always send the first pages of your novel as your sample. If the writer feels she should send a "better" section, that indicates instantly to the agent that the beginning isn't all that it should or could be. If the best writing is further along in the novel, that novel probably needs a rewrite. It should grab the reader immediately. By sending a sample from page 78 (what they think is the "good stuff")only tells the experienced agent or editor that this is a novel that's probably not going to be salable. Doing so reflects an author who hasn't quite "gotten it" yet. Who doesn't understand Harry Crews advice to "leave out the parts people skip." If a sample other than the beginning is included with the query, this kind of tells the agent that there are probably a lot of those "places people skip" in the mss, including the beginning. Not good...

We discussed query letters in our non-fiction writing class yesterday. The prof got it pretty close to what you have it. But your idea of using the same voice in the query as the book/article/whatever is brilliant. One would think that obvious, but we newbies sometimes don't see that. Thanks for sharing this!