Today, I want to give some props to a friend of mine, Terrence McCauley, and his new novel, PROHIBITION. Terrence is an amazing writer and this is a book I really could not put down until I reached the end. Writing students could study this for its pacing alone.

Hope you trust my judgment and show Terrence some love by glomming onto his book if it looks like your cup of tea. Don't forget to hit the "Like" button and if you can, provide a review for him. 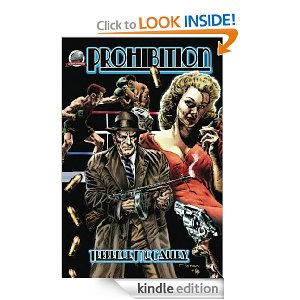 At one time, it was assumed pulp fiction died in the fifties, but the genre is making a solid comeback these days. One of the publishers responsible for its rebirth is Airship 27. What is noteworthy is that original pulp fiction novels were famous both for their stories and for their cover art. In fact, individual artists would develop a reputation by being able to convey what the story was about with just a glance at the cover. Airship 27 has recognized this by giving readers outstanding work in both areas, as evidenced by their latest release, Terrence McCauley’s PROHIBITION, featuring ex-boxer and now mob enforcer Terry Quinn as the tough-as-barbed wire protagonist and illustrated by Rob Moran with Shannon Hall providing the coloring of Moran’s images. The result is a veritable return of the glory days of pulp. Each on their own—either McCauley’s story or Moran’s art—are worth the price of admission. Together, they’re worth much, much more.

Rarely have I encountered a novel that made me turn the pages at such a breathless pace. Mob enforcer Terry Quinn is destined to have his own wax figure unveiled if ever they create a pulp fiction hall of fame. PROHIBITION has it all—mob guys, gorgeous broads, speakeasies, Tommy guns, crooked politicians, smarmy reporters, Molotov cocktails, blood and bodies galore—everything pulp fiction fans want in their reading pleasure is here. My first thought after I read “The end” was that I wanted to read more Quinn. What a wonderful character! He’s realistic, original, and yet so true to the original pulp fiction milieu that it was like picking up one of those wonderful classics of yesteryear that I thought had disappeared forever. It’s back and with a vengeance!

McCauley immerses us not only into a physical world that’s totally believable and based on real historical figures, but the novel is also centered around a mystery that is revealed in the same way a clever and top-notch fighter reveals his skills in the ring to a respected opponent, little by little, round by round. Left hooks and right crosses come out at moments when you least expect them and they have the same effect as a real-life punch would. They smack you in the solar plexus and take your breath away. The pacing is superb. It just builds and builds and builds and the last third feels like you’re hurtling along in one of those high-speed Japanese trains. You sense immediately you’re in the hands of a writing master.

When you read this—and you should—take a moment to savor the cover and the art that graces each chapter heading. The drawings will flat-out take your breath away. Taken together—the art and the writing—signal a return to the glory that was once pulp fiction and is again.

Warning: Literary snobs may not enjoy it as much for it contains the one thing that many of those folks detest—entertainment value. This isn’t about some middle-aged English prof contemplating his navel and wondering why his wife left him. Terry Quinn and other such characters are why she left him—they got tired of hearing the guy conjugate verbs and wanted to hook up with someone who actually had a life, did things and had a set of steel beans in his jeans. That means that if you prefer your books to have sleeping powder qualities—don’t start reading this book.

You ain’t gonna sleep until it’s over.


I've got some other writer friends who I owe reviews of their terrific books, but I kind of slid Terrence in here ahead of the pile--just because. I'm working on the others! 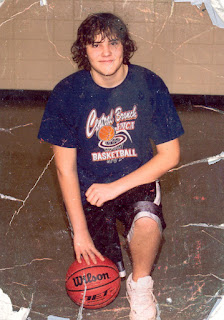 Just posting this because it's one of my favorite pictures of my son Mike. This was his eighth-grade basketball team photo. He was about six feet tall then and played the post. Now, he's 6' 2" and plays... the couch... (One thing that hasn't changed--he's still a babe magnet...)