My excitement is building! Tomorrow morning I climb on a plane and go to Scottsdale, Arizona! My best buddy, Tom Rough, surprised me with a birthday gift a few weeks ago. He’s flying me to his home in Carefree, AZ and got us seats at the sold-out Giants-Reds game this Saturday! I’ve been a Giants fan since I was a little kid when the first baseball game I ever got to see was in the Polo Grounds and was also Willie Mays first game when he was called up from Minneapolis. One of Tom’s friends is Thom Brennaman, the son of Marty Brennaman who announces Reds’ games and he got us into the Charro Lodge Pavilion. Sweet! Tom tells me the MLB owners are having a meeting there during the game and will be at the Charro. I’m kind of hoping one of the minority owners of the Dodgers—Magic Johnson—will be there so I can chat with him about how the Giants are going to kick the Dodgers’ butts this year. Maybe…

And, on Friday, I’m meeting with several of my students from my online novel writing class at Harold’sCorral in Cave Creek near where Tom lives. I’m really, really excited about this! This group grew out of the classes I used to teach for Phoenix College who had hired me after appearing at Microburst a few years ago to teach online for them. I resigned from the college after a couple of years and began a private group and a lot of the Phoenix College students have stuck with me and it’s going to be so cool to get to meet with them up close and personal. And, uber-crime/noir writer Keith Rawson says he’ll stop by and maybe even Eric Beetner who’ll be in town. It’s gonna get all Jack Daniels up in there!

They tell me that Harold's Corral is the biggest Pittsburgh Steelers' bar in the Southwest. Now... where did I put my Carolina Panthers' jersey...

My wife Mary is a bit worried about me going. In the past year, I’ve kind of gone a bit downhill, healthwise. Have pretty severe COPD, among other sundry ailments. Had to leave Bouchercon two days early this past fall, which totally sucked. This getting old stuff is kind of crappy! But, I’ll be fine. Hell, Willie Mays is even older than I am and he’ll be there so I can pony up I figure. Although, I don’t know if Willie smokes as much as I do…

Tom is a special, special friend. Not because he’s flying me out there—but because I’ve been close friends with him for more than 30 years. We met when I came back from some adventures in New Orleans and then California and went back to work for awhile at Michael and Friends Hair Design Salon in South Bend. As it turned out, he claims I kind of got up in his wheelhouse and convinced him to spread his wings and leave South Bend and aim higher. I helped him get a job in a toney Chicago salon and he became the manager of the Vidal Sassoon Salon there and then went to New York at Vidal’s request and became the manager there. In 1996, he and his gorgeous wife Lisa moved to Scottsdale and opened the Taglio Salon which is considered the leading salon in the Southwest.

BTW, Tom wouldn’t tell me what “Taglio” meant—he says it’s some Italian word, but I looked it up and found out it’s a Chinese word used often in tattoos which means, literally, “the won-ton is overcooked so serve it to the white-eye—he won’t know the difference.” It amazes me how other languages can contain so much in a single word!

I cannot wait! I’m looking out my window now at the new snow which fell last night. Dreaming about sitting out at Tom’s pool, sipping some Jack and toking on… enjoying conversation with Tom, Lisa and their bright, funny, beautiful daughter Nicola. It’s gonna be fun!

Wish you all could join us!

P.S. I'd like to thank everybody who bought a copy of THE RAPIST. I can't tell you how much that means to me. This is my retirement income so it goes far beyond meaning just a few sales  to me. I'm happy to report that it keeps on building in sales and is getting great reviews. So... thanks to each and everyone of you! 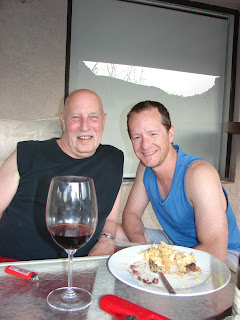 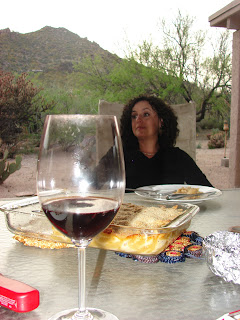 Lisa, Tom and me kicking back at his home in The Boulders, Carefree, AZ when I was out there for Microburst a few years ago and Tom had me stay at their house.

Thanks, Susan and I'll have two for you, okay? And, Maegan--cannot wait to meet you in person!