Review of THE RAPIST by Renee Miller for On Fiction Writing

The reviews are piling up!

I’m delighted to share a new review of THE RAPIST just posted on the On Fiction Writing site, by Canadian reviewer/writer Renee Miller. It’s especially gratifying in that she first decided to read it with a bit of a negative frame of mind and confessed that after the read she’d changed her mind 180 degrees. Plus, she commented that the “voice” in it was, “quite simply, breathtaking.” That makes me feel extremely good, considering that voice is one of my biggest concerns as a writer.

Here’s what she had to say:

From the cover:
The Rapist introduces us to Truman Ferris Pinter, an amoral man occupying a prison cell for a heinous crime committed years earlier. Master storyteller Les Edgerton guides us on a haunting journey inside the criminal mind to show that no matter how depraved a person appears to be, there might still exist a spark of humanity.

It is these lines (Well, after the startling title and image that made me read the back cover.) which tempted me into buying “The Rapist.” The quiet dare that hides inside “…no matter how depraved a person appears to be, there might still exist a spark of humanity.”

Pfft, I thought. So he thinks he’s figured out how to make a rapist appear human to me? I’ll take that challenge. In “The Rapist” Les Edgerton takes the reader deep inside the disturbing mind of Truman Pinter. The clincher, or the hook that reels you into this story, is the uncertainty as to whether or not Pinter is responsible for the crime he’s convicted of. In simpler terms: while you may not doubt his guilt, you’re uncertain as to whether he deserves his punishment.

I’m not going to lie, I’m kinda jealous of what Edgerton achieves in this novella. The writing is tight, and what many authors (including myself) would’ve drawn out over 300 pages or so, Edgerton cut in half. He keeps only the things that matter to this character and this story.

And I have to add that I felt the “voice” in this book is, quite simply, breathtaking. Edgerton takes what should be a sordid, creepy read and makes it beautiful. Although I have long believed that without civilization humanity wouldn’t be quite so tame, I would never have guessed I’d read such a vile character and empathize with him.I think the writing style and voice play a part in that. I found myself trying to think up ways that would make what he’s accused of “okay.” I knew it wasn’t, but somehow I wanted it to be because…I liked him. Yes, my skin still crawls at the fact. In the back of my mind, I was always aware of just how amoral he is. The key (I think) to his appeal is in his charmingly brutal honesty. Pinter never denies anything, nor does he really try to explain it away. I respected that.

Aside from his tight grasp of the craft, what really impressed me about Edgerton is that this story took balls to write. The themes and ideas in “The Rapist” are the very things that make the bleeding hearts that are always eager to take offense practically orgasmic in their shit losing. But this story is not about offending people. It’s not about taking a voyeuristic trip inside the mind of a sicko. It’s not about exploiting the crimes he committed. In my opinion “The Rapist” is about making you look inward. It challenges your personal morals and beliefs on many levels, and forces you to acknowledge that while everyone does bad things, some worse than others, we’re all human. We all share feelings, fears, thoughts and biases with even the lowest criminal. That fact is so disturbing and unpleasant that we choose to ignore it. After all, if we embrace such things, we must also concede that it’s possible for such darkness to lurk inside all of us.

I recommend “The Rapist” as a dare to all of you who claim to be open-minded. Offense takers can do whatever you please, because you usually do. The rest of you, I dare you to pick up this book and read the white space. That’s where the true story is. As for Edgerton, I am definitely a fan and have a much longer to-read list because of it.

Well, there you go! Thank you so much, Renee. Hope those who read it enjoy it as well. 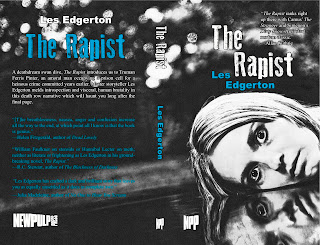 I've received THE RAPIST in my mail this week, and I can't wait to read it (but I must first finish another book or I'll never learn to keep my schedule).

Renee is a very good friend of mine, and her reaction tells me what I already know -- that you're a master storyteller and one of the bravest writers I've met. I am grateful to know you, Les. :)

And now back to reading -- I've got a gem waiting for me soon. My fascination with the gray areas of morality and sanity will undoubtedly be fulfilled.

Thank you so much, Veronica! I'm reading her novel IN THE BONES right now and loving it!

Thanks for sharing my review, Les. I was actually preparing myself for a read I wouldn't enjoy because I believed I couldn't possibly empathize with the protagonist. I don't think I've ever experienced the stunned realization I had about half-way through THE RAPIST. It was like in the middle of a sentence, I caught myself nodding. Then I was like, "Oh my shit, I actually like this guy!"

I do love a good villain, but I usually love to hate them. This was different. Anyway, I'm rambling. I'm glad I picked it up, and it was actually because of Veronica that I did. I love finding authors whose writing makes me go "Damn, he's good." Gives me a higher bar to reach for.

And I'm positively giddy that you're loving In the Bones.