Below is Part II of the guestblog I did for Kristen Lamb for her blog Writer Warriors. It contains an exercise teachers can use for their writing classes on how to write dialog with subtext (off-the-nose dialog). Hope it helps! 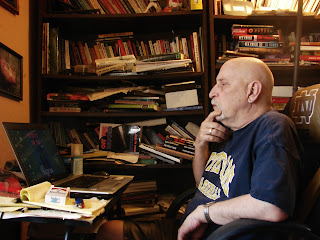 I hope you guys enjoyed Les’s guest post yesterday. Today, Les is offering a bonus…an EXERCISE to help you develop your skills for writing killer dialogue.

Take it away, Les!

This exercise is primarily for the teacher teaching basic writing principles, although perhaps even more advanced writers may get something out of it. It’s an exercise I use in my “on-ground” classes when I’m teaching at a college.

It represents a very basic example of dialogue that’s not “on-the-nose” or a Q&A exchange, to show students a very easy to understand example of how off-the-nose dialogue works and how subtext informs the dialogue more than the actual dialogue.

I usually have two students come to the front of the room and read the following script. Then, I ask the questions that follow. It’s a simple exercise, but I’m happy to report that most of the students really enjoy coming up with their own exchanges, which is part of the assignment.

If anyone uses this in an actual class, I’d love to hear your feedback. (Also, you may want to write your own example—I admit this isn’t deathless prose, but hey! I wrote it in about five minutes. Gimme a break…)

DIALOGUE EXERCISE
She: The Bentley’s baby was cute, wasn’t it?
He: I don’t think I saw it. I was in the kitchen with the guys all night.
She: Well, she was a cute little baby.
He: Great. Women think all babies are cute. Ever heard a woman say someone’s kid was ugly? I mean, except for Shrek’s parents’ friends?
She: Brad and Gena seem so happy.
He: They should be. He just got a promotion.
She: Silly! I mean the baby.
He: There goes the promotion. The raise part of it, anyway.
She: I think they’ll manage. Babies are worth a sacrifice or two.
He: If you say so.
She: Look at it practically. Their little girl will probably take care of them in their old age.
He: That’s a great tradeoff. Let’s see… take care of a kid for 22 years—I’m including college—and they stick you in a home for your final three years. Probably use your own money to fund your own old folks’ home. Sounds like a good deal.
She: It’s not like that.
He: Yeah. Whatever.
Silence for a few seconds.
She: Samantha.
He: Huh?
She: Samantha. They named her Samantha. I think that’s cute. I wonder if they’ll call her “Sam.”
He: They ought to call her “Stinky.”
She: What?
He: You heard me. “Stinky.” The kid smells.
She: All kids smell when they make a mess. You smelled. Besides, how would you know if she smelled? You said you stayed in the kitchen.
He: All kids smell.
She: Then you change their diaper.
He: Yeah. There goes the entertainment budget.
She: You mean the beer budget.
He: So?
She: So is if you cut out a few beers, you’d have plenty of diapers… and lose a few pounds…
He: You sayin’ I’m fat?
She: I’m saying diapers don’t cost that much. A six-pack or two.
He: Maybe. But how many six-packs does it cost to send a kid to college?
She (laughing): About what you go through in a week!
He (mutters): Must be a cheap school. All the classes on the Internet? The school’s in the Caribbean?
She: She’ll probably get scholarships anyway.
He: That’s cool. That means she’ll spend all her time partyin’. End up pregnant.
She: She’ll be way too smart for that.
He: Like her mom was?

This is dialogue that isn’t “on the nose.” It’s one way good dialogue is written. What’s important is what isn’t said–the subtext. The subtext is the real message that’s under the surface of the actual dialogue spoken.

This is what I want you to write (in teams). Two people talking about something that is really being expressed in subtext—dialogue that’s not “on the nose.” You can pick any subject you want for them to discuss (within reason!). Whatever they’re really talking about can’t be mentioned. After you deliver your dialogue, the class will attempt to guess what it is you’ve really been talking about.

Time: 2-3 minutes performance time per person. I’d rehearse this so your team falls within the time limit. That’s where I’ll take the most points off, for being short of the minimum.

Notes: You don’t need to memorize the exchange but can read off your script.

Bonus points: Your team can gain bonus points if you use props and/or costumes. (I’ve had some really original costumes and props show up…)

Hope this helps understand better what subtext is and what off-the-nose dialogue is. Write solid subtext dialogue and you’ll draw comparisons to folks like Elmore Leonard!

Bonus tips: Nothing to do with dialogue but just two tips to becoming a better writer.

1. Don’t show a “single tear coursing down the cheek” of a character. It isn’t dramatic; it’s a cliché. It’s a moronic cliché. Plus, it makes the reader wonder if the other tear duct is clogged or if only one tear shows a person with some kind of half-ass control over their emotion where they can control one eye but not both at the same time…

2. Don’t ever write a sentence like: I wonder if he’ll like me, she thought to herself. I mean… who else does a person think to other than themselves? Unless it’s a sci-fi novel and people can think to others…

These two things are my personal bugaboos in writing. I throw up in my mouth whenever I encounter these puppies! Sometimes, I do more than just choke up a bit of bile. At times, I’ve hurled chunks when encountering these in a student’s work… Just sayin’…

Thank you Les for this wonderful exercise. I am trying to twist Les’s arm for a Part Three on Monday, so here’s hoping

Les Edgerton is the author of HOOKED,  THE RAPIST, THE BITCH and others.

Thanks for reading, folks. Hope it helps give you another way to see subtext.