COVER REVEAL for THE BITCH

Jon Bassoff, publisher of New Pulp Press, just sent me the cover for THE BITCH which comes out in January. I'm super-stoked! It's by Daniele Serra, an absolutely brilliant artist. 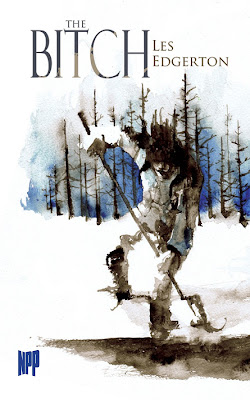 It will be released in January, 2014. This novel has a bit of a history. It was originally published by another press, and the owner of that press graciously allowed me back the rights to it. This will be a new read in several ways: There's a new foreword, written by Anthony Neil Smith, and a study guide for it, plus, of course, the new cover.

It garnered some awards, being named to the Goodreads list of  The 50 Best Noir Novels and it was a nominee for Spinetingler Magazine's Best Novel, Legends Category. It also won the Preditors&Editors Best Novel Award.

It also has some new blurbs by such folks as Anonymous 9 as well as the wonderful ones already given by such luminaries as Linwood Barclay and Allan Guthrie... in fact, a Who's Who lineup of authors who've liked it enough to furnish public praise.

I feel that along with THE RAPIST, it's my very best work.

I hope you'll consider glomming onto a copy when it comes out! This time, it will be issued in paperback as well as an ebook version.

Hey, fantastic, Les. Looking forward to having a paper copy. Loved that book.

Nice one, bud. Good to hear. The awards are very deserving.

the first cover was great but this one is fantastic!!

have always wanted to read this, but have never been much of an e reader. Can't wait.

Thanks, everyone! Jeesh, the lineup of folks chiming in here is an all-star list of writers. I feel like Jodie Foster...

Шэв love to get a signed copy.

Ray, send me your snail mail address in Russia, okay? I think I had it at one time but can't locate it. Send it to me via email if you would and I'll shoot you a copy when it comes out. My email is butchedgerton at comcast dot net

I love the watercolor illustration. Organic and provocative. The title lettering looks like the default browser font.