One of my all-time favorite authors is internationally-bestselling Canadian Linwood Barclay, who writes truly amazing thrillers. In fact, I recommend his work to my novel-writing students and clients as one of the best examples of how a writer creates tension on every single page… which he always does.

My only complaint of him as a writer is that he doesn’t write nearly fast enough! My preference would be for him to come out with a new novel each week, but I guess that isn’t too feasible…

What that means is that when he does come out with a new one, I’m all over it, like sweat on a marathon runner. And, I know to never begin a Barclay novel at night. Not unless I plan to stay up until the sun rises…

Well, he finally came out with a new one! A TAP ON THE WINDOW. 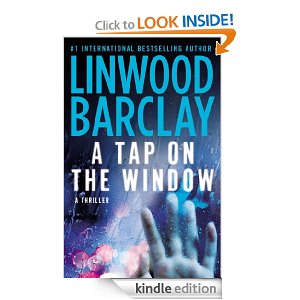 And this one is his best so far!

I’m not good at writing plot summaries so I’ll just rely on the Amazon copy for that:

It’s been two months since private investigator Cal Weaver’s teenage son Scott died in a tragic accident. Ever since, he and his wife have drifted apart, fracturing a once normal life. Cal is mired in grief, a grief he can’t move past. And maybe his grief has clouded his judgment. Because driving home one night, he makes his first big mistake.
A girl drenched in rain taps on his car window and asks for a ride as he sits at a stoplight. Even though he knows a fortysomething man picking up a teenage hitchhiker is a fool, he lets her in. She’s the same age as Scott, and maybe she can help Cal find the dealer who sold his son the drugs that killed him. After a brief stop at a roadside diner, Cal senses that something’s not right with the girl or the situation. But it’s too late. He’s already involved.
Now Cal is drawn into a nightmare of pain and suspicion. Something is horribly wrong in the small town of Griffon in upstate New York. There are too many secrets there, too many lies and cover-ups. And Cal has decided to expose those secrets one by one.
That’s his second big mistake.

What I bring to the table for your consideration is that I really couldn’t put this down! It’s like every one of Linwood’s novels—drenched with tension and blow-by-blow it just keeps ratcheting up--you simply can’t quit reading. It can be used as a textbook for writers who want to learn the very best techniques of creating tension on every page… and it can be read by readers who like their books to be riveting and keep them on the edge throughout the entire novel.

Bad things happen. Lots and lots of bad things. And the ending is so damned powerful. This is by far his darkest novel.

For me, there was an added bonus. Part-way through the read, I came upon my own name! Well, not exactly my entire name. A character named Len Edgerton. Just one sentence that says:

If that happens, if we get a few more complainants—in fact, this kid said he knew of at least one other person, by the name of Len Edgerton or Eggleton or something—well, that might play out very differently.

Well, Linwood and I are kind of friends—in fact, he gave me a great blurb for THE BITCH which comes out in January from New Pulp Press, so I had an inkling that maybe he’d chosen this name on purpose. So, I emailed him. Here’s our exchange:

Me, to Linwood (we’d been talking about Bouchercon and Thrillerfest and he’d told me he wouldn’t be able to make Bouchercon, but would be at Thrillerfest)

To which, Linwood replied (succinctly)
Yup.

And I answered:
OHMYGOD! That's all I can say! I'm already your biggest fan--now I'm your WAY-BIGGEST FAN.

And Linwood came back with:
I'd forgotten about that. I was casting about for a name one day and must have seen something you posted on FB, and thought, that'll do, but I can't do the name exactly the same, so I changed a letter.
Don't sue.

To which I said:
Sue?! I'm so tickled pink I can't see straight. Thank you! Although, if that would have been me, I would've gotten the guy over the rail and into the river... :)

(That last was about what this character did, later on in the novel.)

So there you have it. Inside “skinny” on how I ended up in a frickin’ Linwood Barclay novel!

I have no doubt that this will help make it a bestseller.

No doubt at all.

You’ll wanna get this puppy. It’s one of the best I’ve read in a long time. And I read a lot.

Email ThisBlogThis!Share to TwitterShare to FacebookShare to Pinterest
Labels: A Tap on the Window, les edgerton, Linwood Barclay

Thanks for the heads up Les. On my list right now.

You'll like it, A.J. Hey, you gonna be at Bouchercon? Would love to meet you in person!