REVIEW OF CORROSION BY JON BASSOFF

I want to introduce you to a new book that is one of the best novels I’ve read in decades. First, a disclaimer: I confess I was favorably disposed to like this book even before I opened the pages. It’s by Jon Bassoff, my publisher at New Pulp Press. Jon, in my opinion, is simply the single best publisher on the scene today. I say “in my opinion” because it’s just that. There may well be publishers as knowledgeable, as wise, as talented as Jon out there—and I know several who belong in that upper 2%--folks like Allan Guthrie of Blasted Heath, Brian Lindenmuth of Snubnose Press, Frank Nowatzke of the German press Pulpmaster, and some notable others—but I’ve read every one of Jon’s list of published books and there isn’t a single clunker in the bunch. Not one! I don’t know of any other publisher who has done what he has, and that doesn’t denigrate the ones mentioned nor any others—Jon has just put together an unparalleled list of writers and brilliant work. 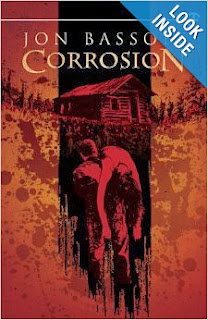 That said, even though I was predisposed to like his book, I was completely caught unawares of the brilliance of CORROSION put out by DarkFuse. It absolutely blew me out of the water and surpassed my already-lofty expectations.

CORROSION is easily one of the best novels I’ve read in the last decade and ranks up there—in my estimation—with the best of Faulkner, Cormac McCarthy, Joe Lansdale and Tom Franklin. And, I read a lot. An average of five novels a week.

It stars a protagonist that I think will end up in the pantheon of the very best of dark characters such as Anton Chigurh, E.O. Smonk, and Joe Lon Makey—the tortured soul of Benton Faulk/Joseph Downs/The Preacher… who are all the same man. Who loves two women enough to torture and kill them—Constance and then Lilith (the name of the first “Eve” in the Bible, which should be a solid clue as to the depth of these characters.).

This is the story told from the fevered and twisted mind of a sociopath/psychopath and when we are in the dark with him, we are genuinely and thoroughly frightened. I think I know something about entering the mind of such a person as I think evidenced by my own character, Truman Ferris Pinter, but Bassoff makes me feel somewhat inferior of my effort with the brilliance he brings to the task of showing us a demented soul. Benton Faulk is indeed, a monster, but Bassoff does what one of my advisers during my stay at Vermont College, Sharon Sheehe Stark, advised us to do when writing a truly despicable character. Instead of that oft-repeated writing “wisdom” others deliver—that “make your villain like kittens”—to gain the reader’s sympathy—she advised the opposite. Don’t do that, Sharon always said, but rather: “Paint your character as black as you possibly can. The light will shine through the cracks.” And this is precisely what Bassoff has done. That light Sharon spoke of, does, indeed, shine through. And not through some blinding beacon but truly “through the cracks.”

I won’t go into the plot—others are much better at delivering plot synopses than I ever will be. I simply urge you to grab onto this novel as soon as you can. If you like truth in your fiction, this is the place to find it. If you believe that in the worst of us a spark of humanity still resides, this is the place to prove that belief. If you simply want to read literature with a capital L, this is where you’ll find it. If you want to read a book that is what Jean Paulhan spoke of in the preface to the infamous STORY OF O, when he said: “Dangerous books are those that restore us to our natural state of danger,” this again, is that book.

UPDATE! CORROSION is to be a film! Details at http://www.dreadcentral.com/news/70620/jack-reher-penning-feature-film-adaptation-novel-corrosion
Posted by Les Edgerton at 10:58 AM

This sounds great. I'm gonna pick it up.

It truly is, Scott!