Hi folks,
It’s been kind of a bad and good week! Last Saturday, as my wife Mary and I climbed into the car to drive down to Indianapolis where I was one of the participants at the Noir @ The Bar, C.J. Edwards was hosting, Mary got a call that her father was dying. We headed over to the hospice and he was basically in a coma. Kind of déjà vu, as her mother had just passed away about three weeks ago and the scene was much the same. She got to tell him she loved him and we talked about staying and I could cancel the reading, but there was no way to know how long he’d last so we decided to go on down. Just as we got to Indy a couple of hours later, she got the phone call that informed her he’d expired.

Anyway, we had a blast at the reading. Saw some old friends and met some new ones. If anyone’s interested, the folks from the famous Booked Podcast were there—Livius Nedin and Robb Olson—and they recorded all of us reading. You can access it at their site at: http://www.bookedpodcast.com/ They’re providing in four episodes and I’d listen to them all. A great lineup of noir writers!

We got some great pub that morning. On the Indy TV news, they announced the top three events for the weekend. We were named #2 behind #1 the Tiny Tots event with Tom Petty, the Pixies, and the Grateful Dead, and ahead of the state finals for the high school marching bands. We should have been #1, but then it WAS the Grateful Dead, so...

Here’s photos of all of us except for the host, C.J. (Chris) Edwards. I have a theory why he didn’t have a picture—he’s a cop and I think he’s undercover and he knows a lot of my criminal friends visit here so he didn’t want them to know what he looks like…  Chris put together a wonderful event and I hope he makes it an annual get-together. We read in the awesome club, the Fountain Square Brewery and were in the actual brewery behind the bar. Tried to find a tap but were forced to go out to the bar and buy our drinks... 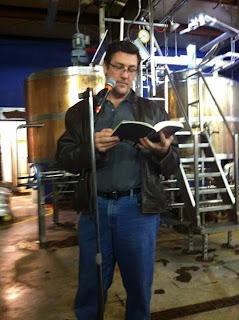 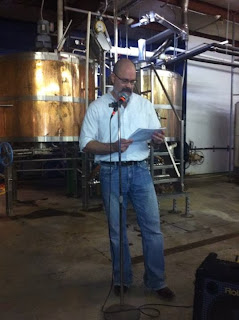 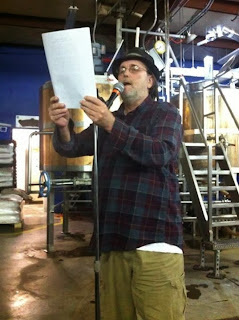 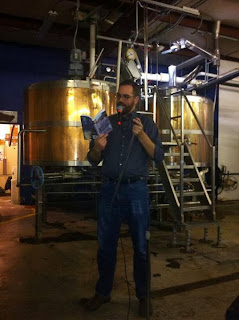 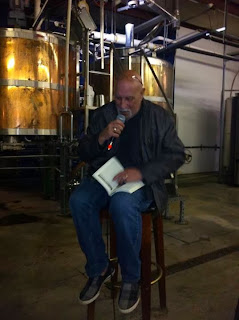 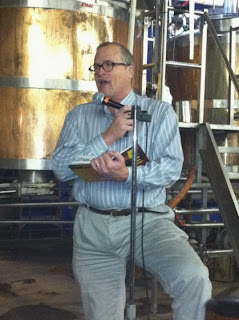 Next Saturday, I’ll be driving back down to Indy. I’m delivering my workshop on Thelma & Louise at Marion College for the Writer’s Center of Indiana. Hope to see a few of my friends from here there.

When I got back home, I got a great email from my German publisher, Frank Nowatzke of Pulpmaster, who’s submitting my black comedy crime novel THE GENUINE, IMITATION, PLASTIC KIDNAPPING that he’s publishing, to the Books at Berlinale, the Berlin-based filmfest. Here’s some info about them from the letter they send out to selected participants:

I’m just pleased and happy that Frank feels this book has a good chance of being selected and then filmed! Cross your fingers for me, willya?! Last year, he submitted a book he published by Rick DeMarinis and here’s what he said about that:  “Last year we had no luck with Rick DeMarinis on account of the fixed setting in the southwest but they were at least impressed by the quality of the story. You never know. Maybe somebody shows up who works with the Coen brothers.”

That echoes my own thoughts. I’ve always thought this book would be a good fit with the Coen’s… hope they’re there! Hi Joel! Hi Ethan! I'll work for beer...

Frank’s purchased the German publishing rights to this book for Pulpmaster along with THE RAPIST and THE BITCH, both published by New Pulp Press in the U.S.. We’re looking for a U.S. publisher for KIDNAPPED and am pretty sure we have one and will be announcing it shortly.

All in all, this has been a draining weekend! I’m ready for a dose of boring now!

Blue skies,
Les
Posted by Les Edgerton at 11:58 AM

Sorry to hear about the bad bit of your week - sending a transatlantic hug through the ether.
Fingers also very firmly crossed for you in Berlin...

This month has been hell for your poor wife. Please extend my best wishes and sympathy.

Nice crew for Noir @ the Bar. Good luck in Germany.

Shit, man, I'm so sorry to hear about your father in law. It was great to see you and better to see Mary in Indy. I had a great time.

I'd give up small bits of anatomy to have my work mentioned and even promoted alongside somebody like Rick DeMarinis's - that's some seriously high-praise, sir. Well done.

Thanks Katherine, Dana and Jed! You guys are the best. I'll pass on your very kind words to Mary. Jed, she really enjoyed seeing you again! She thinks you're the second-funniest guy around. I'm #1... maybe... better be...