Awhile back, I posted a review of Dana King’s novel, GRIND JOINT, which I loved. Recently nominated for a Shamus award, Dana King is making all four of his e-books available for free on Kindle from June 25 – 29. A Small Sacrifice is the nominated book, the story of private detective Nick Forte and what happens when he tries to clear a man’s name and discovers why it had been muddied in the first place. The other freebies include two books from Dana’s Penns River series, set in an economically depressed Western Pennsylvania town: Worst Enemies, and Grind Joint; as well as Wild Bill, the story of how an FBI investigation into Chicago’s organized crime goes awry when a mob war breaks out. 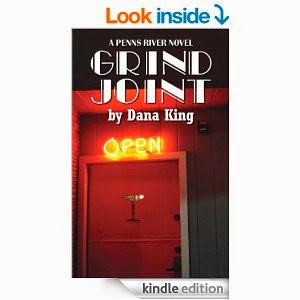 Here’s my review of GRIND JOINT, as originally posted:

I read tons and tons of books. Last count, I’m averaging 3 ½ novels a week. That’s a lot. The truly great ones I try to provide reviews for. At last count, I’m about 15 books behind. Here’s one I read several weeks ago and just re-read it. For the third time. That kind of tells you how I liked it, I think. But, if that wasn’t a bit enough clue, here are some other thoughts I had about it:

One of the best novels I’ve read this year. Period. I’d read three of King’s novels previous to this one and waited and waited for it to become available on Kindle and finally I went ahead and bought the paperback copy, simply because I couldn’t wait any longer. (Note: get the other three—they’re as good as this one is.)

I’m glad I did. Not so much because I finally got to read it—that’s a for-sure plus—but because I’ve now got a physical copy. That’s important because there are dozens and dozens of techniques I want to steal for my own writing and to pass on to my writing students and this just makes it easier to bookmark and make the theft and get out before I’m caught.

In some of the reviews I’d read of GRIND JOINT, it was often mentioned that King was bringing back to life the subgenre of mafia crime books. I guess I’m out of touch—I never realized it had died. Well, if it had, this definitely gave the genre new life. And, if it hasn’t, this is pumping steroids into it. Make room at the table, Mario Puzo…

Reviews very often aren’t about the book itself so much as they are about the reviewer. Some see that as a negative. Not this reviewer. Sure, the plot is complex and sound. Sure, the characters are entirely interesting and plausible. Sure, the world it contains is realistic and well-drawn. But, I read differently than someone who’s not a writer and is just looking for a great way to kill some time. GRIND JOINT does that for sure, but what impressed me more than anything is that I consciously looked for weak places—places I could set it down easily and go and do something else. Well, very few books are capable to achieving that kind of effect on me… but this one did. It’s simply Grade A, Top Quality, Sterling Silver. 24-Carat Can’t-Put-It-Down. Trust me on this. Better: Don’t trust me. Grab a copy and see if I’m not right. I couldn’t find a single page anywhere in it that didn’t grab and hold my interest. Not a single page.

If you prefer novels about vampires and fifty ways to make your eyeballs bleed and your trouser worm get exercise, and characters that are 6’8”, Hollywood-blond, can bench-press Buicks, go 24 hours without sleep, food or water, and can defeat 9,000 ninjas in warehouses (why are these guys always in warehouses?), and only need a toothbrush and a micro chip inside them that draws bad guys to their vicinity like six-year-olds to chicken nuggets to make their lives complete, then this probably isn’t the book for you.

On the other hand, if you’re like one reviewer who said she finished reading this book “on a gurney in an emergency room with crying kids, a car accident victim and a loud drunk” keeping her company, and she “barely noticed them,” then, yeah, this is your kind of book.

Here’s a short description of the four free books:

A Small Sacrifice. Nominated for a Shamus Award for Best Indie PI Novel, it’s the story of Chicago investigator Nick Forte, who is asked to clear the name of a man who has been publicly vilified as the murderer of his young son. Forte learns, while Doug Mitchell might not be guilty, he’s no innocent, and the circumstances place Forte and his family in jeopardy.

Grind Joint. Named by The LA Review of Books as one of the fifteen best noir reads of 2013, Grind Joint is the story of what happens in a small, economically depressed Pennsylvania town when someone gets the bright idea of solving their financial woes by building a low-roller casino. The local cops find themselves up against more than they bargained for when the Russian mob takes an interest. A Small Sacrifice’s Nick Forte plays a supporting but pivotal role.

Worst Enemies. The first of the Penns River books, the story of what can happen when someone takes the scenario of Strangers on a Train way too seriously. Detectives Ben Dougherty and Willie Grabek have to solve two murders organized by a person who is close to both victims, yet operates at some distance.

Wild Bill. A standalone tale of FBI Special Agent Willard “Wild Bill” Hickox, who’s ready to retire but wants to put the cherry on his career by bringing down Chicago’s Number One crime boss. When a gang war re-arranges all the players, Will must choose between duty, experience, and a combination of the two if he is to ride off into the sunset as planned.