Still have more blurbs coming in for my forthcoming memoir, ADRENALINE JUNKIE.

And some disturbing news... I had enjoyed a wonderful response to presales on Amazon, when all of a sudden, I received an email from them that my own preorder was being cancelled. No reason given. When I went to Amazon's site, I discovered it had been taken down. No reason given. I contacted my publisher, Down & Out Books, and they were unaware of this. After several days, they told me they'd talked to Amazon and it was reinstated, but Amazon claimed not to know why it had been taken down, that it was just kind of a "mistake." But, all the presales were gone. I reordered, but have no idea if anyone else who had preordered it had also reordered it. I hope so! If you were one of those who'd preordered it and got an email from Amazon that it was cancelled, I'd really appreciate it if you'd reorder it. And, let me know if you receive any more emails from them.

I was kind of suspicious about the whole thing and now am really suspicious after being contacted by good friend and fellow writer, Elaine Ash, that this same thing had happened to a dozen other authors and that she was investigating it. Check out her post at

The common denominator seems to be that each writer is a conservative or libertarian. I'm pretty upfront that I'm a libertarian--my political belief is that I want the government pretty much out of my life. No big deal--at least in my mind--but it seems to matter to some, and perhaps to Amazon. If so, that's a fairly blatant case of censorship. We'll see...

Anyway, here are the new blurbs with more to come:

"Les Edgerton is a back-alley Kerouac. Walk away from this knowing that your life-defining moments were his slow Tuesdays."

Liam Sweeny, author of "Presiding Over the Damned."

Edgerton's prose hits with the force of a hammer--as does his recollection of an America, both deeply flawed and wonderful, that is now more important than ever to keep in our sights. A Hillbilly Elegy with a deep, pulsing heart, Adrenaline Junkie makes sense of one man's life while showing us all new aspects of our own.
--Jenny Milchman, USA Today bestselling and Mary Higgins Clark award-winning author of Cover of Snow and Wicked River

A tryst with Brit Ecklund, a shoot out in a deserted grade school, robbing a laundromat in front of a patrol car. Those are just a few moments is Les Edgerton's checkered past. He went from a Huck Finn-like childhood in Texas, the swinging sixties as a criminal, time in Indiana's Pendleton prison, and eighties excess in New Orleans, with little slowing him down until a good woman found a way. Funny, harrowing, and poignant in spots, reading Adrenaline Junkie is like being lucky enough to sit at the bar next to that guy who has lived a lot of stories and knows how to tell them. Yes, Les Edgerton was an adrenaline junkie and he always knew where to get a fix.

I'm pretty sure these folks were commenting on the book's material and not whether I swing to the right or left... and that's as it should be.

I hope some of you will preorder my book or get a copy when it's officially released. For the paperback edition, you can preorder at the photo of the cover on the column to the right. Thank you so much, in advance! 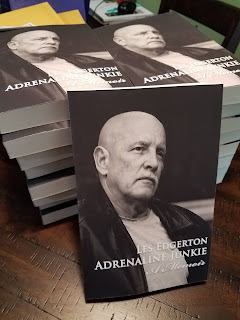 Oh! Amazing job with the article. I come across few helps over here related by this post to do my task nicely. I highly recommend this. Thanks a lot……… Professional Nursing Essay Writing Service

Youre so cool! I dont suppose Ive learn something like this before. So nice to seek out anyone with some authentic thoughts on this subject. realy thank you for starting this up. this web site is one thing that is needed on the web, someone with somewhat originality. helpful job for bringing something new to the web! play casino

Keep it up for more valuable information about this related blog. Gets a great opportunity for professional website designing services by OGEN Infosystem in India with experienced web designers and developers.
Web Designing Company

It is the normal tendency of the visitor to visit the sites that are ranked among the first pages of the Search engine result rankings. Here comes the need of the services of the leading SEO Agency in Noida. SEO is an acronym for Search engine optimization techniques. These days the majority of many online business owners are fully aware of this phrase. With the growing challenges of web promotion because of the stiff competition, the requirement for a specialized SEO service is emerging out as the most vital aspect of internet marketing approach.

SarswatiEnterprises said...
This comment has been removed by a blog administrator.
March 23, 2020 at 10:18 PM

I am so satisfied to come upon this piece of write up, very plenty advanced my knowledge to the next top level. Great activity and maintain to do equal.what is sushi