Hi folks,
Just got the probable covers for my two novels about to be published by StoneGate Publishing and thought I'd share them with you.


JUST LIKE THAT
This is a road novel, based on my own experiences in and out of prison. I'd estimate it's about 80 percent true life stuff. Several excerpts from this novel have been published as short stories in such magazines as Murdaland, Flatmancrooked, High Plains Literary Review, Houghton-Mifflin's Best American Mysteries 2001, and two excerpts will be published in the forthcoming Noir Nation. A couple of the excerpt/stories have been nominated for a Pushcart Prize. 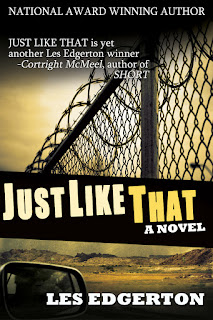 The second cover is for my novel THE PERFECT CRIME. This novel was previously sold in auction to Random House and then the deal fell apart when Bertlesmann bought R.H. as previously chronicled on this blog. I'm deliriously happy that Aaron Patterson is bringing it out now with StoneGate. When I wrote this, one of my good friends, Bob Parker, had done projects for the government for various agencies and he vetted it and proclaimed it, indeed, "the perfect crime." He told me I should either do the crime myself or publish it and that I'd probably make more money if I did the crime. We'll see... He also said that it was a template for a perfect crime and that I should leave out or change at least one element so that criminals couldn't follow it, but I decided not to. And, since I wrote it back in 1995, there have been a couple of attempts to perform this crime (no one had at the time I thought up the idea), but they've all been caught. I think it's because the book wasn't out as if it was and they'd read it, they might have avoided capture... Now, law enforcement is up to speed and even if it was adhered to, they'd probably end up in the gray walls motel. 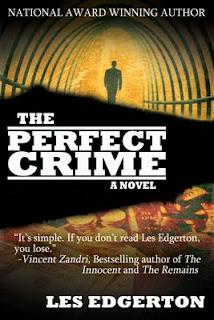 They'll both be available soon from all the various outlets, including Amazon and through StoneGate Publishing. I'll be sure and let you know when.

Blue skies,
Les
Posted by Les Edgerton at 8:16 AM

I love those covers, Les. I'm one of those people who will totally be attracted by the cover and the title. Even if they weren't your books, I'd pick them up in a heartbeat.

Both really good, powerful covers, Les. I like the colours too, evocative of mean streets and noir... Will be checking back to see when they're out. My kindle can't wait!

...both covers splash hints of what lies within those pages. And I'm so looking forward to the day when supportive blurbs arm my covers from fellow writers...that's me being envious ;)

Thanks, Sally and Elliot. It just feels so good when fellow writers wish you well. We've got a pretty special sorority/fraternity, don't we! I'm sending the same vibes your way with your work.

Covers doth maketh the manuscript....I have a conviction that a snappy cover is really important and you scored big on these ones. Who is the designer?

I'm really impressed with the covers. Nice blurbs, too! Can't wait to read them.

Brock, the artist's name is Fuji Aamabreorn. He works for StoneHouse and StoneGate Publishing.

Thanks, Debbie! I hope you enjoy the read(s) when they come out.

Hi Les,
I know I've already said this, but these covers are fantastic! They both offer just enough to make you wonder what's inside. I especially like the one for Just Like That...
Stonegate really did an outstanding job--can't wait to get my hands on 'em. Winners, all round (and you too!) Be proud!

Thanks, Maegan. I just got done with a email dialog with the publisher, Aaron Patterson, and he sent me the final copy for JUST LIKE THAT with the front- and back-matter and reviews and I'm stoked! Don't yet know the exact date it will be released but it's within a matter of days! What I'll do is ask those who plan to buy a copy (or ten...) to try to buy on a certain hour on a certain day as I understand that creates bestseller numbers on Amazon.

I've reread it recently about five times and I'm really proud of JUST LIKE THAT. THE PERFECT CRIME will follow shortly after that.

They're also submitting it for various literary awards. I'm pumped!

Thanks, Luca! That's high praise from a person who definitely knows what a good cover should look like!