Off the beaten track a bit today. It seems today’s writers are just a bit too polite. Nobody wants to say someone is a twit even when it’s obvious. I kind of liked the “good old days” when writers would talk about other writers they didn’t like or respect, before that monstrosity that undermines free speech called being “politically correct” took hold and silenced opinion.

Opinion is what writers should be about. We’re about the only ones who halfway express ours nowadays. You can’t find a politician who does, can you? At least one you can believe…

Just want to share what some writers of yore used to say about their peers and other literary matters. I got these from one of my favorite books, W.O.W. (Writers On Writing) accumulated and edited by Jon Winokur.

“The cruelest thing that has happened to Lincoln since he was shot by Booth was to fall into the hands of Carl Sandburg.” Edmund Wilson

“I am fairly unrepentant about her poetry. I really think that three quarters of it is gibberish. However, I must crush down those thoughts otherwise the dove of peace will shit on me.” Noel Coward on Edith Sitwell.

“If it were ever thought that anything I wrote was influenced by Robert Frost, I would take that particular work of mine, shred it, and flush it down the toilet, hoping not to clog the pipes. A more sententious, holding-forth old bore who expected every hero-worshiping adenoidal little twerp of a student-poet to hang on his every word I never saw.” James Dickey

(My favorite)
“One must have a heart of stone to read the death of Little Nell by Dickens without laughing.” Oscar Wilde

“Henry James had a mind so fine that no idea could violate it.” T.S. Eliot

“Henry James was one of the nicest old ladies I ever met.” William Faulkner

“Mr. Henry James writes fiction as if it were a painful duty.” Oscar Wilde

“I am reading Henry James… and fell myself as one entombed in a block of smooth amber.” Virginia Woolf

“I was reading Proust for the first time. Very poor stuff. I think he was mentally defective.” Evelyn Waugh

“He writes plays for the ages—the ages between five and twelve.” George Jean Nathan on George Bernard Shaw

“I loathe you. You revolt me stewing in your consumption… the Italians were quite right to having nothing to do with you. You are a loathsome reptile—I hope you will die.” D.H. Lawrence to Katherine Mansfield

Rebecca West: “I’ve never been able to do just one draft. Do you know anyone who can?”
Interviewer: “I think D.H. Lawrence did.”
Rebecca West: “You could often tell.”

“When his cock wouldn’t stand up, he blew his head off. He sold himself a line of bullshit and bought it.” Germaine Greer on Ernest Hemingway

“He was the critics’ darling because he never changed style, theme nor story. He made no experiments in thinking nor emotion.” John Steinbeck on Ernest Hemingway

“I detest him, but I was certainly under his spell when I was very young, as we all were. I thought his prose was perfect—until I read Stephen Crane and realized where he got it from.” Gore Vidal on Ernest Hemingway

“You know the beginning of Gatsby, the little frontispiece? They say that Fitzgerald made that up. I always thought that was such a great thing to do—make up a quote and pretend it really inspired you.” Nora Ephron

“I’m told, on very good authority, that he hasn’t stopped writing at all. That he’s written at least five or six short novels and that all of them have been turned down by The New Yorker. And that all of them are very strange and about Zen Buddhism.” Truman Capote on J.D. Salinger

“Phillip Roth is a marvelous writer but I’d hate to shake hands with him.” Jacqueline Suzann after reading Portnoy’s Complaint

“He’s a bad novelist and a fool. The combination usually makes for great popularity in the U.S.” Gore Vidal on Alexander Solzhenitsyn

“Asking a working writer what he thinks about critics is like asking a lamppost what it feels about dogs.” John Osorne

“I don’t see how you can write anything of value if you don’t offend someone.” Marvin Harris

Hope you enjoyed these! 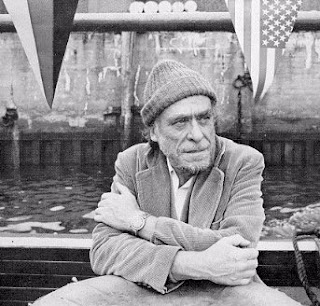 Here's a guy who's never had another writer say a negative word about...

Oh I absolutely love these quotes, Les! :D Thank you.

“I don’t see how you can write anything of value if you don’t offend someone.” Marvin Harris

Most writers nowadays are too preoccupied with knitting their network, they forget that remarkable people and truly remarkable art are never pleasing, never safe, and always piss people off.

Well-said, Veronica! You get it. That's the biggest compliment I can give. We are so concerned with people's feelings that we no longer are as concerned with the truth. We just want to be "liked." It's kind of sad... There are so few true rebels these days.

“That’s not writing, that’s typing.” Truman Capote on Jack Kerouac, is my favourite quotation from your list.

The truth in it still stands sternly on this very day. Tis like you said, Les, "We are so concerned with people's feelings that we no longer are as concerned with the truth. We just want to be "liked." It's kind of sad... There are so few true rebels these days." I feel some novelists, nowadays, are considered weak writers, because they want too much of an emotional response; and therefore will try to hard to gain approval from a lot of people. Some pretend to be rebels nowadays to be called different in order to be liked. See? Why no be a rebel. Period!

That is what I took from the above quote. Thanks for this post, Les.

Thanks, Ty-shaun. My sentiments, exactly!