Canadian crime writer, Rob Brunet just posted his review of my book THE BITCH (winner of the Preditors & Editors Award for Best Thriller and nominee for the Spinetinger Magazine Award for Best Novel (Legends Category) on his blog. 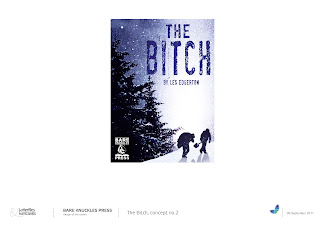 THE BITCH in Les Edgerton’s novel is not who or what you might expect from the title, but it’s a serious bitch nonetheless. It hounds Jake, Edgerton’s matter-of-fact narrator, from chapter one to the very last page. And along the way, Edgerton makes sure we get to know the bitch real well.

For the most part, the story takes place outside of prison, on the bricks, but the joint casts its shadow large from the moment Jake’s former cellmate calls him out of the blue. Walker Joy is a cruel oxymoronic name for a guy who brings a shit storm into Jake’s life—a good life he’ll do anything to protect.

In a jocular passionate voice, Jake leads the reader step by rational step into dark corners completely foreign to your average "civilian". The horrific decisions Jake has to make would be much less believable if it weren't for Edgerton's masterful hand. Given what’s at stake, there’s hardly a moment when a you can argue with the path Jake takes—even as the grotesque results pile deeper by the page.

This is the kind of book you're going to reach for at 3:30 in the morning because whatever crap is disturbing your sleep won't stand a chance against the terror looming in the next chapter.

THE BITCH doesn't rely on bad luck or cheap device to create drama. Nothing pops out of the closet when it oughn't. Jake plays the cards he's dealt. It's a lousy hand and he does all he can to make it better. He's got optimism, criminal skill, and solid execution. He even gets a couple good breaks. But the deeper he goes, the more the bitch laughs in his face.

And where THE BITCH takes him ain't funny at all. Even if it makes tragic good sense.

Thanks, Rob! It means a lot to me when another writer likes my work.

Blue skies,
Les
Posted by Les Edgerton at 7:43 AM

Purchased your book based on this review.
Heather

Thank you, Heather! Hope you enjoy it!

Just finished your book - wrote this five-star review on Amazon:This was a grittier novel than I ordinarily read. It was fascinating to read a story from the viewpoint Jacob, the ex-con trying to go straight. Les Edgerton gave Jacob an impossible situation and then turned the screws to heighten the challenges. The plot was expertly woven and kept me turning pages far into the night. I wasn't sure how he was going to pull off keeping the reader sympathetic to Jacob as the plot advanced, but Edgerton managed to keep me concerned about Jacob in spite of the horrific scenes portrayed in the novel. I highly recommend this book not only for lovers of crime thrillers, but for authors learning how to keep the heat up for the protagonist. I'm glad I read this book.

I am not a professional reviewer, but have been blessed by your posts on writing. This book shows me that you now what you are talking about on your blogs. Thanks.
Heather