I love me some good black comedy and I just read one of the best of the year in Keith Nixon’s THE FIX. Josh Dedman is pretty much that—a deadman. His girlfriend cheats on him and then dumps him. He gets blamed when 20 million pounds comes up missing from the bank he works at and he’s blamed for that. 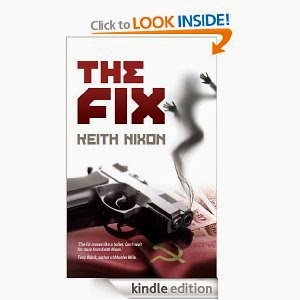 But, all is not doom and gloom. There are a few bright spots in his life. He goes out of his way each day to get mugged by a homeless Russian bum, accommodating the thief to the extent that he buys cheap wallets to defray his mugging costs, and he meets an irritating guy on his daily commute who tries his best to bore him to death. There’s a mysterious sexy blonde… And, yeah, those are the fun parts of his life.

And then, just when it seems like it couldn’t get any worse for him, his boss is whacked and he’s the number one suspect. With each development, I kept shaking my head and muttering, “It could happen, it could happen…”

This is the kind of corporate caper Joseph Finder might write if he spent a week studying everything Tim Dorsey ever wrote and then they collaborated.

In fact, the Russian bum Konstantine (who just happens to be an ex-KGB agent who’s fallen on hard times) and who mugs him daily, can find his long-lost twin brother in Florida. Just ask around for Serge Storm…

This laugh-out-loud novel is more than just entertainment—it’s an object lesson for parents who wish to keep their sons away from a career in banking.

This is one of those novels that I usually preface at the watercooler at work by saying, “You gotta read this book!” You really do. And then, once you’ve finished it, join me in petitioning Mr. Dixon to write a new novel starring Konstantine—this is a character who surely deserves his very own novel.

Email ThisBlogThis!Share to TwitterShare to FacebookShare to Pinterest
Labels: Keith Nixon, The Fix

I enjoy your book reviews and have purchased books based on your recommendations.

I have a few questions generated from reading your book: Finding Your Voice.

In one of your exercises you mention seeing the world through your characters' eyes. Do you have suggestions for doing this in first person memoir?

As a child, in my memoir,I can only react to my perceptions of my parents. Later on, in therapy, I will be able to pull myself out of the memories and see things from my abusers' point of view. But in the immediate situation, I wouldn't have a perspective on their motives.

To give the reader some idea of the background, occasionally I have my parents tell me stories about events from their past. Even with that, as a child, I have to respond in age-appropriate and situation-appropriate ways.

The second question has to do with scene changes in first person. I'm not finished with your book and you may cover it in later chapters.

You compare scene changes to cinema. How can you show time passing and scenes when writing in first person. Sometimes it may be the next day, or a few hours later. Is there a way of doing it to keep reader oriented and at the same time not pull them from the story?

Your book is an invaluable resource and, when I finish reading, I will post a positive review on Amazon. Many of the things you've mentioned are helping me edit my first draft. Your suggestions have improved my use of dialogue and helped me to trust the reader more, not having to tell them every detail.

Heather, thank you for your kind words and great questions. I'd like to suggest a craft book on writing memoir that may be able to answer most, if not all, of your questions. IMO, the best book on writing memoir ever written is Tristine Rainier's YOUR LIFE AS STORY. I cannot recommend this highly enough. There are many books on writing memoir (and I own 'em all!), but by far, most seem intended for grandparents writing family histories for their grandkids. Pithy advice, like: "Play the music from your childhood to trigger memories." Tristine shows you how to shape your material to the proper structure and I'd also recommend it highly to fiction writers.

Thank you for your book suggestion. I finished reading your reference - Finding Your Voice. Excellent and entertaining (hard to find in a good reference book). I posted a review on Amazon and hope that others will seek out this resource. I read it on Kindle and now want a hard copy because it is a good reference to have handy.
Hope your New Year is blessed.
Heather

Thanks, Heather. The print run from Writer's Digest Books sold out, which is why I was able to get the ebook rights. But, I think you can probably get a print copy if you check abebooks at www.abebooks.com

I appreciate your kind words!