Just got a couple of early Christmas presents! First, Frank Nowatzke, owner of the German press, Pulpmaster, just sent me the cover of THE RAPIST by artist 4000 and it's really cool. Can't show it yet as he wants to get up the preorder lists first.

I also just signed and sent back the contract to Pulpmaster for my black comedy crime caper novel, THE GENUINE, IMITATION, PLASTIC KIDNAPPING. Frank has also entered it in the Berlinale, the companion film festival held in Europe along with the Frankfort Book Festival. He's hoping a studio along the lines of the Coen Brothers are there as he thinks that kind of studio would be perfect for it (I totally agree!).

And then, for a couple of years Eric Campbell, the publisher of  Down and Out Books and I have been trying to get together for him to publish one of my books and we've reached an agreement to have him publish the aforementioned THE GENUINE, IMITATION, PLASTIC KIDNAPPING. I'm really happy with Eric running with this one. It's one of my favorite novels and I'm writing a sequel to it. It began life as a short story in The South Carolina Review and then I wrote the novel. And then I wrote a screenplay for it and it ended up as a Finalist in both the Writer's Guild and Best of Austin screenwriting competitions.

Eric came up to me a couple of years ago in Cleveland at Bouchercon. Actually, he came to a Noir@TheBar function Eric Beetner had created and at which I was one of the readers. After my reading, he approached me and introduced himself and told me he'd been following my career and wanted to talk to me about placing one of my novels with them. What really impressed me about Eric--other than he was a super nice guy and actually bought copies of about four of my books I had with me--was that he was such a wonderful throwback to the old-time publishers in that he'd traveled to the convention with the purpose of scouting and contacting authors! Who does that nowadays? During our conversation, he said he'd had trouble hearing my reading (the sound system in the bar was horrific!), and that he could only make out about every other word, but that he was convinced he had to have me publish with him as even only hearing every other word was transfixing for him so he could tell from that it was powerful stuff. What writer doesn't like to hear things like that?!

Then, I began to read his slate of authors and, just like Jon Bassoff of New Pulp Press, he'd assembled a truly fantastic group of writers.

And then, the last great Christmas present is that Jon Bassoff contacted me to let me know that he'd already gotten an impressive list of reviewers for the January release of THE BITCH. The launch promises to be successful and I'm really stoked!

I'm just so thankful for the support of guys like Jon and Eric. These are guys who not only know literature but do everything in their power to support authors.

Hope you folks are getting great gifts like this this year also! 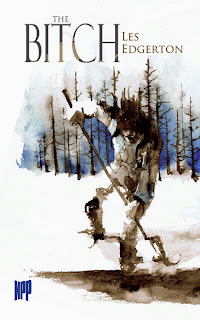 Coming in January from New Pulp Press in paperback and ebook formats. Put it on your list!

I can't think of anyone more talented or deserving, Les!! You deserve every bit of it!

Ditto, Maegan's comment, Les. You deserve all of it and more!!!

Thanks, Maegan and Mary. My parole officer doesn't think I'm that deserving of anything...

I appreciate your support which never wavers! Hope you know you get the same back from moi.

Wow, your head must be spinning! Congratulations!!! And great cover for the The Bitch.

Thanks, Susan. And I love the cover also--best thing is I didn't have to pay for it like the last one...