I take great pride in today's post. I want to tell you about a good friend of mine's first published novel, Rob Boley's THAT RISEN SNOW. I've kind of gone along the journey a bit with Rob and feel a "brotherly" pride in what he has created.

I met Rob a couple of years ago when I was asked to be a presenter at the Antioch Writer's Workshop in Yellow Springs, Ohio. This was one of the most pleasurable weekends I've ever spent at such an event and Rob was one of the reasons why. He was part of the writer's group I was privileged to work with (we dubbed ourselves "The Best Writer's Group" and we were...). Every single member of our group was not only a uber-talented writer but the nicest group of people I think I've ever got to hang out with.

Rob and I became instant best friends. We hung out just about every hour except when we were sleeping. Our favorite place was "The Gulch" my kind of bar, along with our other best friend, Amanda Winfield.

Well, each member of our talented group read to the assembled folks at Antioch and Rob's reading tore the roof off the place with the wild reaction it garnered. Just plain laugh-out-loud writing. I saw it immediately as something that should be published and I introduced him to one of my publishers who jumped on it with both feet. At last count, Aaron Patterson of StoneGate Ink is planning on publishing a series of Rob's books of at least eight, I believe. This is the first one and they're all a riot of laughs.

Rob and I have continued our friendship. He's been over to spend weekends with me and my wife Mary and son Mike a couple of times--the last time he also brought his fantastic daughter Annabella. And, she truly is fantastic. I've never seen a warmer and more loving relationship than these two have.

Anyway, without further ado, I want to introduce Rob and his first novel and urge everyone to run right over to Amazon and glom onto an ebook copy. It will also be out in paperback in a couple of months.

For another treat, check out Rob on his blog with his amazing daughter! At http://www.robboley.com/blog/ 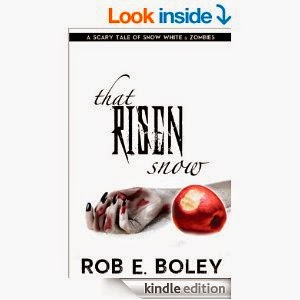 THAT RISEN SNOW
by Rob E. Boley
Book One of the Scary Tales: A Killer Serial

DESCRIPTION:
The zombie sequel to Snow White begins where the classic fairy tale ends, with the Prince’s kiss waking Snow from her cursed slumber. Snow wakes up, but she doesn’t wake up right.

Now a deranged zombie, Snow infects both the Prince and the seven dwarfs’ leader. That leaves the young dwarf Grouchy, who is secretly in love with Snow, to find a cure for her malicious curse. So begins an epic journey that pits the lovesick Grouchy against dwarf-hating human soldiers, Snow’s ever-growing zombie horde, and his own bad temper.

But when Grouchy and his motley crew of survivors escape Snow’s clutches and seek refuge in a nearby human village, he soon finds that her affliction has spread faster and further then he ever could have imagined. Snow is hell-bent on spreading her horrid curse across the land, and it’s up to Grouchy to stop her before it’s too late.

REVIEWS:
“Part delicious dream, part nightmare, That Risen Snow is an aberrant fairytale that is just as much a horror story. Boley has a knack for dark comedy and witty prose, and he blends it with a nearly-hardboiled voice uncharacteristic of (and therefore pleasantly unique in) dark fantasy fiction. It’s a story you’ll want to tear ass through but will equally want to slow down for, so you can savor the prose.”
—Brady Allen, author of Back Roads & Frontal Lobes


“In 1912, the Brothers Grimm published an old German fairy tale they titled Snow White. Little did they know that a guy named Rob Boley would come along a hundred years later to reveal the ‘true’ and adult story of Ms. White, or ‘Snow’ as she was known in real life… No one could have possibly foreseen what would become of Snow in the hands of a diabolical, maniacal imagination like Boley’s… Such a nice boy… with such a fevered mind. Read this with the lights on and a baseball bat or shotgun handy… you’re gonna be glad you did. This is a Snow White you ain’t gonna find in the middle school library… Get it, read it, and try to keep the screaming down.”
—Les Edgerton, author of Hooked, Just Like That, and The Bitch

Great blog. I appreciate your words. I know I am going to have a great read after reading your reviews. Peace. Love ya, brother.