I'm extremely proud to let you know that my friend Tom Pitts asked me to write the foreward to his newest novel, HUSTLE, and I can't begin to tell you how proud that made me. This book is groundbreaking in its content and approach and to use a term that is overused but apt in this case--absolutely brilliant. 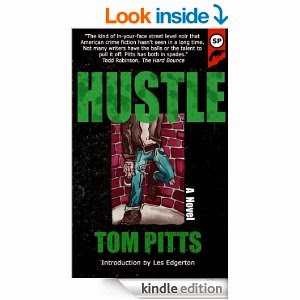 Here's the foreword as it appears in the book:

Tom Pitts’ Hustler is, quite simply, one of the very best novels I’ve read in a long, long time. There’s just no other way to describe it. Years from now, I’m convinced it will be viewed in the same light as the early work of Charles Bukowski—as a ground-breaking classic. To be honest, there is no one to compare Pitts to with this book. It will be the novel that will be considered as the first—and best—of, for want of a better term—“hustler” noir.

Perhaps the best comparison—not in the writing, but in the revealing of an underworld lifestyle—would be to Robert Beck’s seminal classic, Iceberg Slim. The difference is, Pitts doesn’t attempt to portray his protagonist as heroic as Beck does, but more along the lines of Jean Genet’s character Divine in his brilliant Our Lady of the Flowers. But, while both of these writers and both of these books use the settings of the underworld of sex-for-pay and/or aberrant sex-for-pleasure, there is a significant difference in Hustler, in that Pitts’ protagonist, Donny, isn’t portrayed as a man who sees himself as a maverick or a rebel, raging against the system and defiantly proud of his rebellion, but simply as a human being to whom drugs have reduced to an intolerable lifestyle which he is unable to escape, although the entire book is about his struggle to do so. Both Iceberg Slim and Divine embrace their lifestyles, but Donny does not. That is the difference and why, even though there are similarities in settings and lifestyles, Donny is more akin to Bukowski’s Martin Blanchard than Divine or Slim. And yet, he isn’t like Blanchard either. The thing is, he’s an entirely different character than just about anyone in literature. Donny shares similarities with other literary creations, but in the end, he is a whole new creation. And, because of that, Hustler is a whole new category of noir.

Hustler is going to be seen by its critics as both remarkable and abhorrent. Often both by the same critic. It’s going to offend some crime writers I suspect, because compared to their own work, which of course they will in their own minds, they’re going to realize that their efforts—compared to Pitts’—are more along the lines of The Hardy Boys Have Adventures in Sugar Creek. In other words, there are many pretenders and posers writing crime and noir novels, who have little or no experience with the element they are writing about. Pitts knows his milieu and better than anyone I’ve ever read. His novel rings loud and clear with hard, honest truth. He knows these guys and he doesn’t judge. Readers looking for the comfort of stereotypes are bound to be disappointed. Like Bukowski’s Martin Blanchard, he allows his characters to have souls and, indeed, insists on it.

Pitts told me that there was some pressure on him to edit some of the rougher parts to make it more palatable for readers. In his words, “They're trying to have me soften it a little, I'm trying to hold fast.” Please do, Tom! If any of this gets “softened” it will only prove that as a culture, we have, indeed, become so PC’d we’ve lost our souls. To “soften” this book would mean literature has lost to moronic politics. And we’ll all be the poorer for that.

The novel is available in an ebook format as well as in paperback. It's just one cool-looking book and my preference is the paperback version.

Tom and I had become friends online a couple of years ago and then I got to meet him at Bouchercon in Albany this last year and we knocked back a few brews together and instantly bonded. He told me a bit about this book then and I knew right away I had to read it. It's based on his own true life experiences and those are always the best books. You just get the kind of verisimilitude other writers just can't come close to in cases like this.

It's also by the Snubnose Press folks and these people know their crime and noir fiction. Brian Lindenmuth is simply a class act and his books all rock. I'm a bit prejudiced I suppose--they chose to publish a small collection of my short stories a couple of years ago--Gumbo Ya-Ya.

Anyway, I hope you glom onto a copy. You'll see that I haven't steered you wrong at all. It's a book that's going to make a bunch of those "Best of" lists and it deserves to.

WOW! I think I just found a new writer to read. Sweet and great forward, Les. Rock on.

Hey Les! I can't wait to have you write a forward for my novel. I think I am gonna make it. Blue skies forever.