The following review just came out today from the Australian blog: JUST A GUY WHO LIKES TO READ 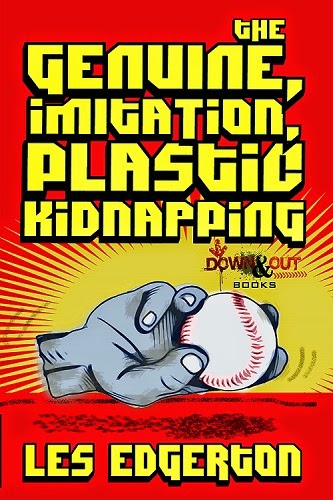 From the back of the book:
The Genuine, Imitation, Plastic Kidnapping is a mix of Cajun gumbo, a couple tablespoons of kinky sex and a dash of unusual New Orleans settings. The reader follows the comic mis-adventures of Pete Halliday, busted out of baseball for a small gambling problem, Tommy LeClerc, a Cajun with a tiny bit of Indian blood who considers himself a red man, and Cat Duplaisir, a part-time hooker and full-time waitress. With both the Italian and Cajun mobs after them, a chase through Jazz Fest, a Tourette's outbreak in a black bar and other zany adventures, all seems lost.

My Review:
An ingenious comedic crime caper that captivates, engages, and demands the reader’s attention. THE GENUINE IMITATION PLASTIC KIDNAPPING is, as the title implies, a story of kidnapping that perhaps isn’t the real McCoy, attempted by a couple of armature part time criminals who blunder, battle, and somehow pull of a daring (and stupid?) abduction of a mafia boss. But wait, that’s not the beauty in this brutally brazen idea – the Mafioso is only part of the plan. Amputating his right hand and ransoming it back to him is the idea – one that actually works…for a while.
One of the things I really liked about this book was the fact that the central plot device didn’t deviate despite the bevy of criminal enterprises the unlawful entrepreneurs Pete and Tommy underwent. Pete gets left for dead, locked up, shot at, becomes instantly rich the equally broke and then goes on the lamb from his bookie that he’s in debt to, all before the unique kidnapping plan is hatched. It’s a great ride that only gets better.
As if THE GENUINE IMITATION PLASTIC KIDNAPPING wasn’t cool enough in its own right, the endnote by author Les Edgerton paints the characters in a new shade of realism by virtue of their real-life counterparts. Wow – pretty much sums up reading post script.

Feels good to know that the folks "Down Under" are liking it!

Email ThisBlogThis!Share to TwitterShare to FacebookShare to Pinterest
Labels: Just A Guy Who Likes To Read, The Genuine Imitation Plastic Kidnapping