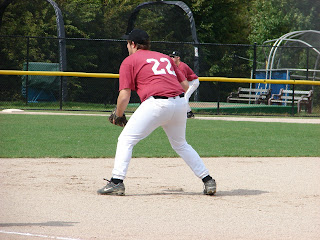 Mike playing first base at a Perfect Game Showcase when he was a freshman. 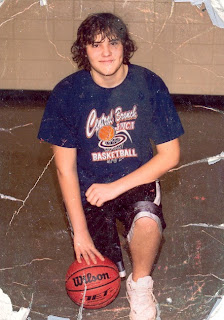 And, here he is for his eighth-grade basketball team. 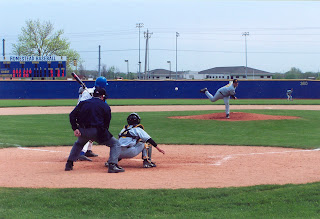 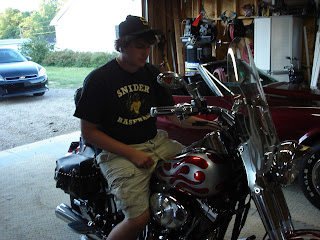 Not baseball! Mike's sitting on his Uncle Neil's bike and begging him to give the bike to him! 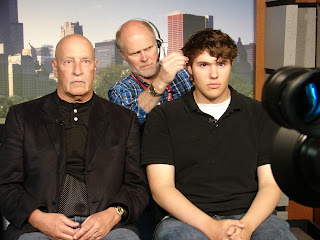 And last... Mike and I getting our "makeup" before our appearance (twice!) on MSNBC-News for the book we co-authored, a spoof on Little League baseball titled "Surviving Little League."
Which is this book. We had a wonderful time writing it together and the best thing was we got to go on TV and were also interviewed on over 40 radio shows from all over the country from Pittsburgh to San Francisco. Best experience of my life was writing this book with Mike (it was his idea) and appearing on all the shows. (He was 12 when we wrote it.)
Posted by Les Edgerton at 9:19 AM

You can NEVER, EVER go wrong with a book about baseball. I loved every word of this (and the pictures), Les. :-)

Thanks, Shannon. Maybe I'd better get to work finishing this one.

This truly was a magical time in my life. I really loved coaching the little guys. We did a lot of things differently. For one thing, all of us coaches agreed to approach it as a game and not as our resume to manage the Cubs. That meant that we played each kid the same number of innings and forgot that league rule of minimum innings for lesser players. We didn't have any "lesser" players--we just had kids who wanted to play ball and we made sure they could. I even let them make out the lineups several times and they did a better job than I ever did. Kids know who's doing a good job, better than the coaches sometimes. Lot of other things. We never let kids pick their teams during intra-squad scrimmages--they also know who the good players are and pick accordingly, which means the lesser talented players get chosen last. Didn't want that to happen so we'd make those choices.

So... can I pencil you in for a copy if I finish this and sell it to a pub?

You can pencil me in for a copy, also! I love memoir, my favorite genre. A well-written memoir on any topic will suck me in. This excerpt did!

Thanks, Ann! That does it. I've got two for-sure readers, so I'm going to finish this and email my buddy Oprah to see if she can bump Dr. Phil to let me come on...

Oh, wait! She's not doing her show anymore, is she!

Oh, well. Guess I'll just finish it cause I like the subject...

Thanks for sharing this excerpt - I really enjoyed it! I also like your comment about playing all the kids the same amount of time. As a mother of three soccer players, I think that's the most important quality in a coach. And if the kids don't get their fair share of time, they do notice it, and so do the parents.

Million dollar arm and ten-cent head...I love it. Your way of weaving the past and present, using distance for time...great job!
Edge of Your Seat Romance

Thanks, Susan and Rachel. I appreciate it. I'm about halfway done with this. Think I'll show it to my agent to see if Chip thinks I should go ahead and finish it. I appreciate everyone's positive feedback. You guys are so helpful!

Oops! I meant to write "Raquel." Please forgive me. It's that Halfzeimer's rearing its head again...

Fantastic. What an amazing story and a great relationship you two must have.

One criticism--I just don't like the first sentence. "I look out over..." That phrase is just used too much.

Thanks, Michele. This is a first draft and I wrote it almost ten years ago and hadn't looked at it until yesterday just before I posted it, so it's got some flaws! But, I probably wouldn't have caught that one! I appreciate the catch!

Awesome. Thanks for sharing that.