Well, it's official. I've finally arrived on the literary landscape. I've just won the prestigious literary award, the virtual Brass Monkey Award, given out after months, weeks, days, minutes seconds of serious some deliberation by the award-winning committee of a dozen, several one, namely, the ubiquitous Anonymous 9, who also goes by the street name of Elaine Ash down at her neighborhood Starbucks and the Bucket O Blood Yuppie Bar and Juice Emporium where she hangs out frequents when appearing in public for her adoring fans. 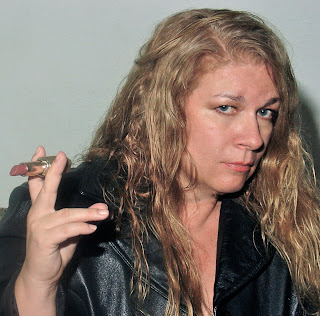 It seems Ms. Anonymous wrote a really cool book that I reviewed for Amazon and Goodreads and she liked (I think) the review and that’s the story of how I came to win this fantastic award from her.

Absolutely loved this book. I’m a sucker for vigilante tales and this is one of the best I’ve read in a long time. Plus, it had the bonus of the “crusader” employing a helper monkey to assist him. Unless there’s a genre featuring helper monkeys that everyone else knows about and I don’t, this is only the second novel I’ve ever read that featured one. The first was John Vernon’s magic realism novel, Peter Doyle in which the protagonist, on the hunt for Napoleon’s penis, owned a monkey he’d fashioned from body parts and when he was low on cash, would help fill the coffers by leaping on the backs of sailors, slash their throats and take their purses. Anonymous 9’s use of a helper monkey in Hard Bite, while different, was equally delightful and original. Just wondering how the folks at PETA liked it… Since I eat meat as often as I can, I’m without their prohibitions concerning critters and I give it a 5 out of 5 stars… Just a darned good read! 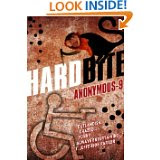 Here is what Anon 9 had to say in her blog post announcing my award:

Anonymous-9’s Brass Monkey Award goes to LES EDGERTON for publishing a review of HARD BITE on Amazon and getting in a lengthy reference to Napoleon’s penis. Is there any reference to Napoleon in HARD BITE? No! Is there anything about Napoleon’s penis in HARD BITE? No! No! So for sheer ingenuity and creativity in review writing which only the great LES EDGERTON could manage, the virtual Brass Monkey Award goes to him. (He really liked HARD BITE, by the way.)

Les is the respected and lauded author of THE BITCH, among other novels.

I’m presently sitting by my phone, awaiting the call from Stockholm… Eat your heart out, Stevie King!

And my virtual Brass Monkey Award is sitting proudly on my (virtual) mantel, surrounded on each side by my Fatboy posters of Cheryl Tiegs and Pee Wee Herman. (Don’t ask—it’s a long story…)

Oh, and if you're interested in the other novel in the helper monkey genre, check out Peter Doyle... 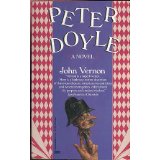 Here's the actor who will play the monkey in the movie...

Word is, this guy's dad used to live with Michael Jackson... He's got show biz in his blood!

Would like to leave a comment on Amazon re The Bitch, after being blown away by next year's The Rapist, but there's some problem with the Kindle app for Ipad. And this Imac. Even my (super smart & beautiful) techhead wife can't fix it. (Who is now also writing crime novels. Doh!) If you do have time to send by email wd be much appreciated. Thanks.

Hey Mark--I'm not clear on what you're asking me to send via email--just let me know and it's done!

And, get Anonymous 9's book. It's fantastic! BTW, I just got a copy of your novel, THE DARK MAGUS AND THE SACRED WHORE and am diving into it. Already, I love the voice!

Well Les, you've outdone yourself this time. Words fail. Thanks for being my buddy and when I finally get to meet you in person, I'll see if I can't award you a real brass monkey. I may be tempted to hit you over the head with it first, but I'll hand it over when I'm done, promise.
Anonymous-9
author of Hard Bite

Oooooooh! Hit me over the head! I'm excited! I've been bad--very, very bad--and need chastized and scolded and yes--hit over the head!

Be still, my beating heart...


Anon--you're very welcome. Your book is da bomb! And so are you!

if you'd be so kind Les it would be great to get a digital copy of The Bitch attached by by email. I can't reead for review as your Kindle gift should work on Ipad but doesn't yet, at least not on this one. Then I could review it.

Most impressed with Anonymous-9's site and your review of her book.

Thanks for getting The Dark Magus and the Sacred Whore. You can tell I was young(er), the title's far too long. It will be Sacr5ed Slut if I try to get it published again.

Greeting from Bohemian Bohemia, a suburb of Hastings UK MHastings

if you'd be so kind Les it would be great to get a digital copy of The Bitch attached by by email. I can't reead for review as your Kindle gift should work on Ipad but doesn't yet, at least not on this one. Then I could review it.

Most impressed with Anonymous-9's site and your review of her book.

Thanks for getting The Dark Magus and the Sacred Whore. You can tell I was young(er), the title's far too long. It will be Sacr5ed Slut if I try to get it published again.

Greeting from Bohemian Bohemia, a suburb of Hastings UK MHastings

Bought your Hooked. An actual book! remember them?

If you do get time to delete one of my two badly typed posts it would help me look less deranged, thanks Mark
Put The Rapist review up at my blog http://markramsden13.wordpress.com/

Thanks, Mark! Sent you the file and hope you enjoy the read!

Hey, Mark--have you and Chip communicated yet?