Since this is about the time of year during which the event in the poem below took place, I thought it perhaps timely to repost it here.

This is the only poem I've ever published. It's based on a true event and I've included the bio which states that which Blue Moon included.

Some of you may have loved ones who are incarcerated. This is the toughest time of year for most who are inside the walls. A box of cookies is really appreciated! Although, for myself, a carton of butts was even better!

Things are much better these days... 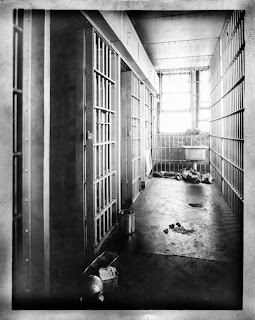 My Father and Robert Frost/Les Edgerton

One day I found a volume of poetry by Robert Frost in the prison library at Pendleton and checked it out.
Back in my cell, I read: Home is the place where, when you want to go there, they have to take you in.
When I made parole, I called my mom to tell her my good news. I found out that my dad had never read Robert Frost.
At least not that poem.

Les Edgerton is an ex-convict, having served a bit over 2 years in Pendleton Reformatory on charges of second-degree burglary (plea-bargained down from multiple counts of burglary, strong-arm robbery, armed robbery, and possession of narcotics with intent to sell. The poem here is based verbatim on his own experience upon making parole.

I've read this before & I'm glad I read it again. Says it all. Judy

Thanks for sharing yourself through poetry. Sometimes the few words of a poet can speak volumes, can't it.